This is Marie, contributing an article about the latest update to the Seasons 52 menu. We received an invitation to try out the latest dishes as a lunch rather than the blogger group visit we’d had the last few times.You may have read our articles about previous visits, and rather than a big event with several entrees presented, Grant and I had a cozy meal by ourselves. We need to do a few more just-us lunches together. It’s been remarked before that the baby has been remarkably well-behaved in restaurants, but he is still a baby – or rather, a toddler, with all that implies – so good behavior still does require a good bit of attention and pre-planning. The last visit we took to Seasons 52 on our own dime, sometime last year, was apparently on a day when his wiggles were in particularly large supply, and it wasn’t the most successful of meals. This one made up for that last visit quite well.

We started off with a barbecue pork flatbread that had Grant’s name written all over it. I thought it was fine, but ceded the majority of our portion to him because he loved it. He likes a bit more burn to his food than I do, and barbecue is one of his favorites. It had a good mix of flavors and a nice crunch around the edges. 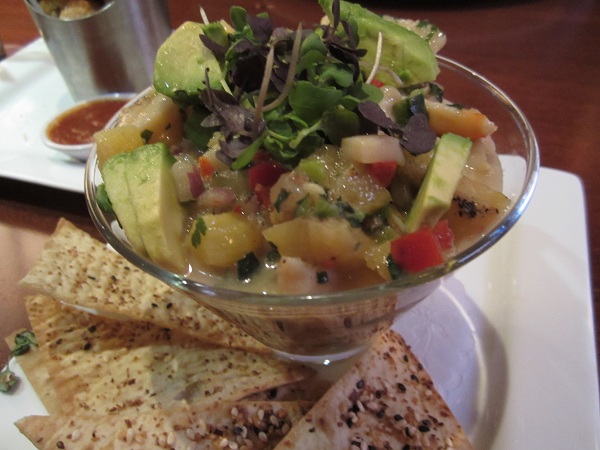 For the main dish, Grant took the ceviche and I got the rainbow trout. I’m afraid I took Grant’s lunch choice and gave him menu envy…again. He’s gentlemanly and lets me pick first, but sometimes I take what he would have ordered. In this particular case I felt a little tiny twinge of guilt because oh my goodness but that trout was excellent. It was absolutely perfect in every way – nicely singed grill stripes, the meat moist and flaky and a little peppery, and a little light sauce; it did not need any lemon juice at all. The carrots were quite tasty and I also got some of the asparagus. You have to have asparagus in the spring. There is a rule about it somewhere. Grant’s ceviche, made with shrimp and scallops in a little cocktail of pineapple and coconut, was quite pretty, and he appeared to enjoy it. 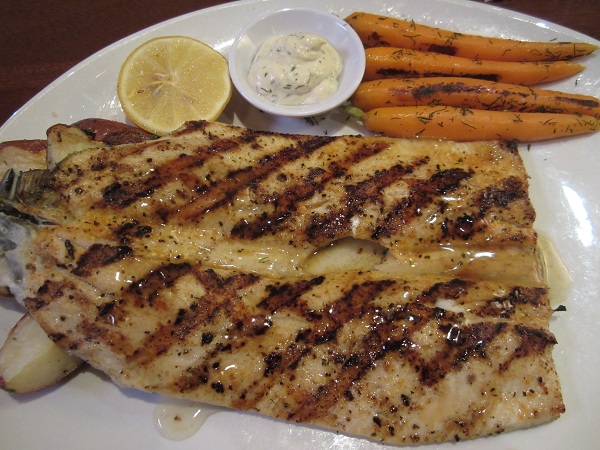 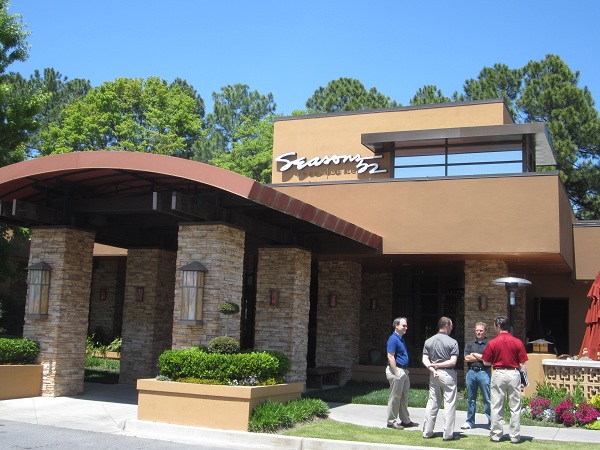 The seasonal cheesecake was mango this time, and although mango is usually a favorite flavor of mine, for whatever reason it just doesn’t work for me as a cheesecake topping. I took the key lime dessert, and it was even better than usual. The server mentioned that key limes were in season, which probably accounts for it. All in all, this was a lovely meal, served quickly, and if you like trout you need to go get it right now before it’s all gone. Now I need to go do some more research online about key lime pie recipes. If you would like to try making a pie, here’s a link to one that looked particularly yummy, and the comments combined with the article nicely hit nearly all the key points of what I read about the subject.

Other recent blog posts about Seasons 52: