Rose of India is a newer restaurant in a very old building. It’s, I think, three doors north of Old Brick Pit on Peachtree. Years and years back, I came down from Alpharetta, where I then lived, for a meal at Old Brick Pit and found they’d closed for the evening, and ended up in this building instead. I am not sure what it was then, but it might have been a Tex-Mex joint. I definitely remembered the slanted walls and large windows, even if the visit made no other impact.

I am much more likely to remember the visit to Rose of India. This place was not on my radar, and nobody’s talking about it apart from a pair of brief writeups, five years apart, that are linked below. This is very much old-fashioned Atlanta tuxedo-n-curry Indian, but it’s pretty good and better than the standard. Plus, the baby made such a mess that I’m unlikely to forget it, ever. 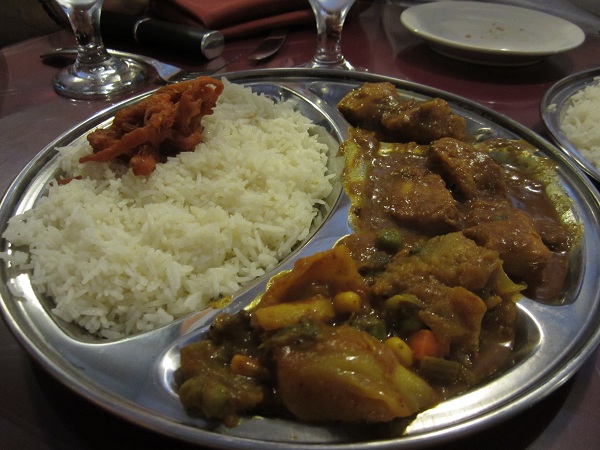 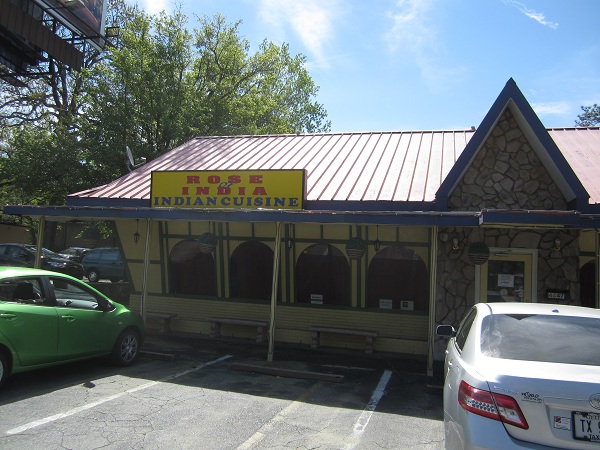 This was another Saturday where the baby and I were on our own. Marie had to work and the girlchild was in Vermont for a spring break trip with her church. Our friends Helen and Vincent had first suggested a different Indian restaurant, one that opened disagreeably later in the day for lunch, but this place was timed just right. We were the only guests while we were here, which was probably for the best, because the baby didn’t have a bib packed in his diaper bag. I ordered him a small lunch of naan and rice pudding, looked around the bag and gulped. I tucked a nice napkin into his shirt and let him get phenomenally filthy. Tuxedo-n-curry restaurants always have those big thick napkins.

The lunch plates here come with rice and a small vegetable curry. We ordered four entrees to split between us: lamb and chicken curry, eggplant bhaji, and chickpea chana daal. Like most Indian places, this one is vegetarian-friendly, and the food was perfectly serviceable Americanized Indian fare. It was nicely seasoned, and far from brain-meltingly hot. The prices were low, the service was excellent, easily among the best that I’ve ever had from an Indian restaurant in Atlanta, and I really enjoyed the conversation with my friends.

But recall of this place will be dominated by memories of the toddler, wielding the tiny little spoon that our server kindly found for him after I failed to find his plastic spoon in the bag. We may question who may have been responsible for the lack of a bib, but the plastic spoon was actually in there, and I was just incompetent in finding it. I felt bad for the restaurant as the kid dug into the rice pudding and made the biggest mess of that napkin that anybody’s ever seen. He even ate a little bit of his lunch while attempting to wear it.

Other blog posts about Rose of India: