One of the many benefits to come from expanding our knowledge of authentic foods from other countries has been learning that I actually do like some food from China a whole lot. Of course, I have suspected forever that the stuff that I’ve shrugged about and tolerated all these years because it makes other people happy while I find it inoffensive is all made from ingredients in giant cans from Sysco of Szechuan. I’m not intentionally being judgmental, but it’s the same reason I ask whether fries are hand-cut or frozen before I order them. I know what Sysco fries taste like already, and I equally know what the Moo Goo Gai Pan tastes like in every city in America. I’d like to sample the tastes and flavors of food that hasn’t been made for mass appeal. That said, here is the first of three stories sprinkled over the next two weeks in which we sample some Chinese food quite unlike the Golden-This-Happy-That mall standard and come away really enjoying the new experiences.

Bei Jing Kabobs, which I believe opened around 2009 as Te Wei BBQ before becoming Te Wei Kabobs in late 2010 and finally Bei Jing Kabobs several months ago*, is nothing at all like any Chinese food that I’ve had before. From the flavors to the presentation, this was something brand new to us. We met with our friends from Spatialdrift as they continued their inexorable march northward through every restaurant on Buford Highway for some supper here a couple of weeks ago. We got a lot of food for very little money, and most of it tasted terrific. There seemed to be only two people working here. One gentleman stayed in the open kitchen preparing all the food, and one lady, who spoke very little English, shuttled food back and forth and attempted to provide some help in ordering, which guests will do with a pencil and pad. 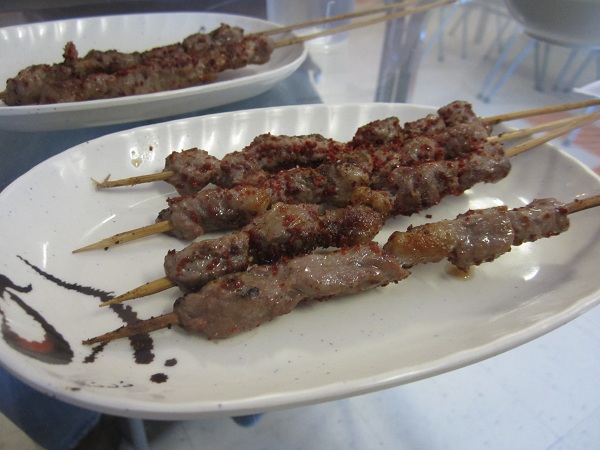 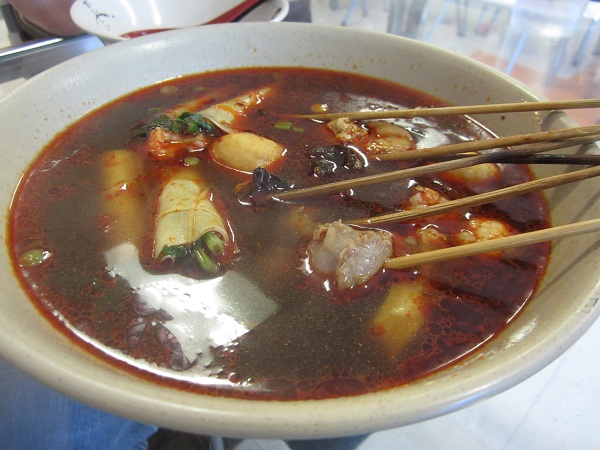 So sticks are the shtick here. These are skewers called “chuàn” of various meats and vegetables, grilled and given a dip through a little bath of seasonings and spices like chili flakes and cumin before being brought in haphazard order to your table. We found that we had the most luck ordering in multiples of two or four, so we could easily identify and remember what we were sampling. We had lots of really tasty food. I enjoyed the corn on the cob, and the lamb went over really well with everybody. A dollar for one of those skewers is just about the best dollar you can spend for a couple of miles. The only down side was something called Chicken Jane, which I found disagreeably tough, even for gizzards, but all of the other foods that we tried were very good.

Most of the sticks come to only pennies or a dollar or two. The most expensive skewer would be a $5 ox penis. I’d like to think that I’ve an open mind, but gizzards were as far on the limb as we were willing to walk this time out.

You can also customize a great big bowl of a chili soup for, again, about no money at all. Each ingredient is about sixty cents, or $5 for ten things. There’s plenty of opportunities for lots of experimentation and it’s easy to make everybody in a party happy, even if you’re getting together with people who have different diets or restrictions and want to try food from China that is nothing at all like what we grew up with in the strip malls. Our total bill, for the four of us, came to under thirty dollars. Plenty of room left in the budget to kick back with a cup of milk tea a couple of doors down! I think that this is Quickly’s first store in Georgia. Internationally, this is an enormous chain, with more than 2000 locations. Most of their American stores – perhaps five dozen – are in San Francisco. They opened this one in 2010, followed by another, larger store in Duluth the next year, and then one in Athens. I have not figured out a good way to distinguish between all the different restaurants that serve milk tea. They all do it much the same way, with a deep menu of really good cold drinks and different flavors to mix in, including those bizarre tapioca balls that I will never learn to like, and do it in a comfortable room with fairly loud music and nice furniture. They offer a small menu of fried snacks, so that the twentysomething college kids who most often frequent these places can have supper and keep drinking all night and never lose their WiFi. Oldsters like us can share stories of Orson Welles being drunk and taking increasingly bizarre acting jobs before going home to get to the baby.

*This may cause some confusion for anybody looking for this restaurant, which is in a two-level strip mall on the right if you are driving south from I-285. The name is now Bei Jing Kabobs, but the name that is printed on the sign at the street is still the original Te Wei BBQ.

Other blog posts about the kabob place, whatever its name is this time: