One of the most pleasant surprises that we’ve had in recent months has been our visit to Stillhouse, where we were anticipating some pretty good bar burgers and were given, instead, some downright excellent ones. The restaurant’s PR company invited us to their media launch last month and we left very impressed.

The Andrews Entertainment District, where Stillhouse can be found, is a collection of eight venues within one strip mall shell. It’s the building next door to the one where Souper Jenny resides, and is also home to the well-known Cellar 56 and Czar Ice Bar. Marie and I got to speak a little bit with Stephen de Haan, president of the 23 year-old enterprise, about Stillhouse and where he got the incredibly curious idea of smoked moonshine. 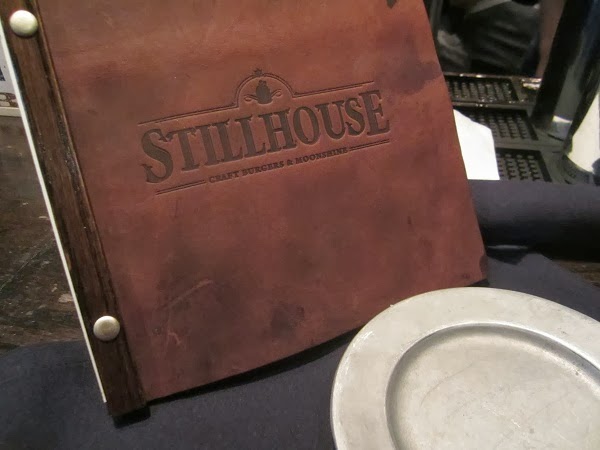 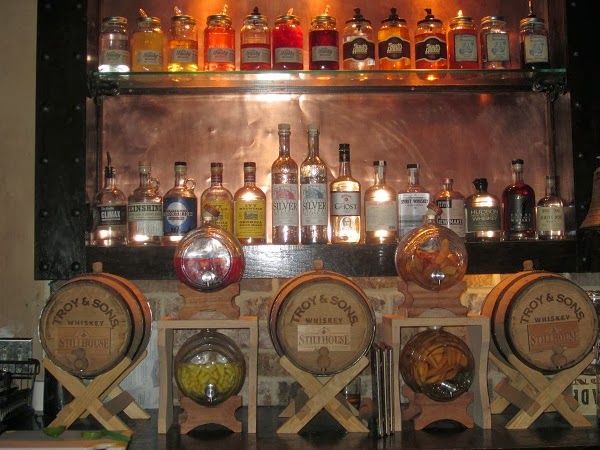 Legal “moonshine” has become increasingly popular over the last six years or so, with several companies, including both Old Smokey and Asheville’s Troy & Sons, producing small-batch blends that replicate the flavors of the better “white whiskeys.” I read a little about Troy & Sons, what with them being based in Asheville and all, and found a farm-to-table ethos that’s equivalent to many good restaurants that we enjoy. To find just the right corn for their product, they selected a nearly extinct strain of white corn at a farm called McEntire; an “unadulterated, non-genetically modified original American corn.”

So, at Stillhouse, they’re mixing up cocktails using a number of these moonshines, and they’re making their own house-infused fruit moonshines, with strawberries and peaches and all sorts of things soaking in glass barrels. But the real show is with the smoking. For an additional $3, you can get your choice of wood started up with a quick blast of butane and left to smoke in a glass for a few minutes before the drink is poured in. De Haan is not aware of anybody else in Georgia who does this. We’re no experts, but we’re not aware of anybody else on the planet who does this. 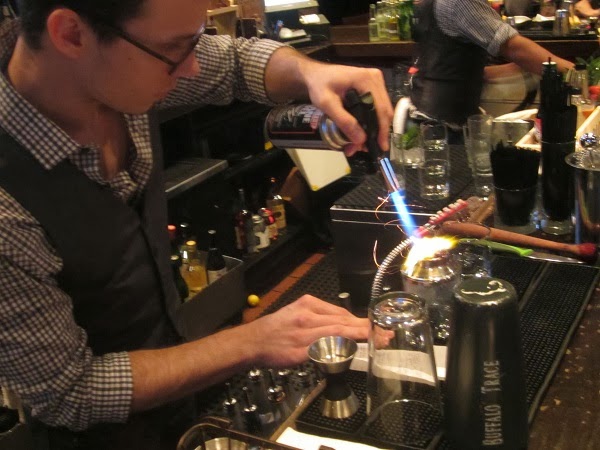 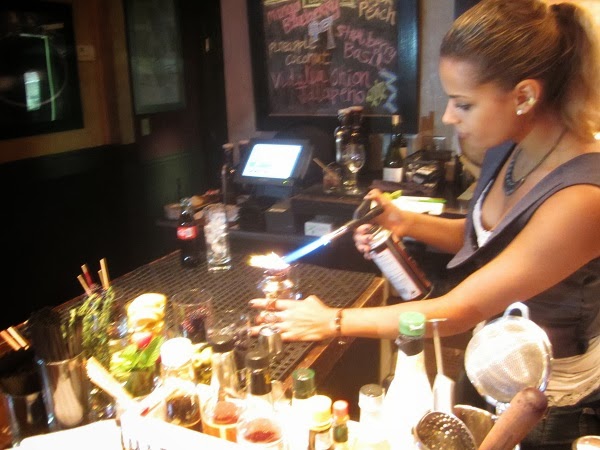 For the teetotalers out there, the food is more than adequate. The menu is similar to many new-Southern places in town, and we enjoyed some deviled eggs and a very nice peanut butter hummus with toasted naan-style bread to start. Other appetizers include mussels steamed in moonshine – we spoke to Malika from Atlanta Restaurant Blog (linked below) and she said these were very good – and new-Southern staples like fried green tomatoes and a pimento cheese dip. Normally, you’d expect me to sample the last of those, but I was planning to have some of that on my burger. 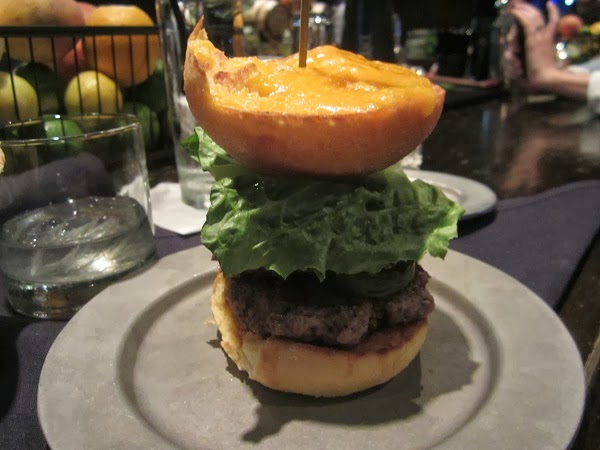 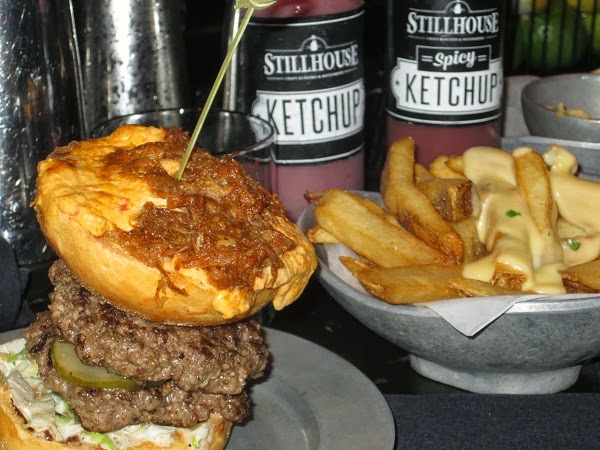 The Augusta BBQ Burger is two beef patties with a little pulled pork, sweet barbecue sauce, cole slaw and pimento cheese. Heck, they saw me coming. It is a really good burger, and it is a really sloppy burger. It’s the sort of wonderful mess that you’re simply unable to put down once you’ve started, because you’re only going to want to clean up after yourself once. Marie had their much cleaner and simpler Classic, without bacon, and was similarly impressed. Other burgers are on the higher end of the pomposity scale, including one with duck confit and goat cheese, and another with collard greens and peaches. There are a couple of interesting vegetarian options, including one with a house-made black-eyed pea patty, that peanut butter hummus from the starters menu, green tomato relish, onions, peppers, corn, spinach and cheese. We had some fries smothered in melted Gouda from Ashe County Cheese in West Jefferson, NC and I wanted to run my finger along the plate and lick it clean.

We had a very pleasant evening and enjoyed the spectacle of the smoking, the burgers, and the ginger beers. We learned a lot about drinks from the bartender, Francesca, who took care of us, and was really awesome at her job. If you enjoy whiskey, you’ll want to come by Stillhouse to try these smoked moonshines, and if you don’t, then you’ll want to come by and sample these burgers. They may look like a trendy Buckhead bar, but they are definitely doing it right.

Other blog posts about Stillhouse: