Hmmm. A tricky subject, this one. A while back, I wrote about this place’s original location in Kennesaw and praised the really excellent pizza. I also, playfully I thought, teased the business on their design, made up principally from dorm room Hendrix posters, and got a barrel of buckshot from the business’s owner for my cheek. You wouldn’t think that a deeply silly chapter that evoked the omnipresent “Hey man! Is that Freedom Rock?!” TV ads of the late eighties would aggravate anybody, but some people are touchy. Suffice it to say that subsequent trips to Kennesaw to pick up their excellent pies were done very quietly, lest our cover be blown.

About six months ago, we got a coupon flyer in the post from Peace, Love and Pizza announcing that they have four more stores in the works. According to their Facebook page, the first of these to open is in Woodstock, so Marie and I motored up there with the baby to check them out. Now, I must remind readers that we are always on the lookout for new content for the blog to feed its ravenous schedule of four-times-weekly updates, but I’d resolved that not even playful teasing would be appreciated should the owner ever see our post, and so this place would not receive a fresh write-up if I couldn’t resist it.

Well, color (of your dreams) me surprised. The interior of this place is downright neat. This isn’t made up with the dorm room chic of the original. This location, which has some interior seating – three booths and a window counter space – that the Kennesaw store lacks, spotlights some really creative and spirited artwork on the walls by Blue Frog, a little hippie-minded shop in downtown Woodstock. It is funky and warm and accommodating, probably in the same vein as the first few Mellow Mushroom stores might have been in the 1970s. They employ a terrific staff, too. Well, turn it up, man, because you need to try a pie from these freaky moonbats. 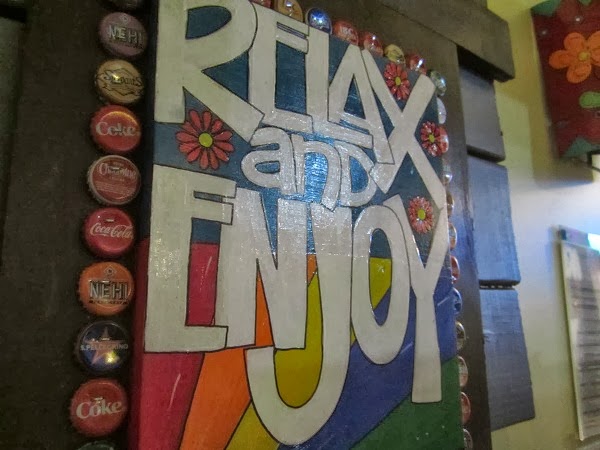 Having said that, the pizza that I ordered was my least favorite of the pies that I’ve tried here, but it was still better than so many others that I’ve had at other, lesser, establishments. I had a Desperado, which has a mild and sweet barbecue sauce in place of a traditional tomato, along with mozzarella cheese, red onions, bacon, chicken, banana peppers and pineapple. With a menu of eighteen specialty pies, including several vegetarian and vegan-friendly creations, there is enough to keep everybody sampling. The quality of the ingredients is higher than anybody else in the mainly-delivery market, and their traditional sauce which they use on most of their pies is so darn good that I found myself missing it here. 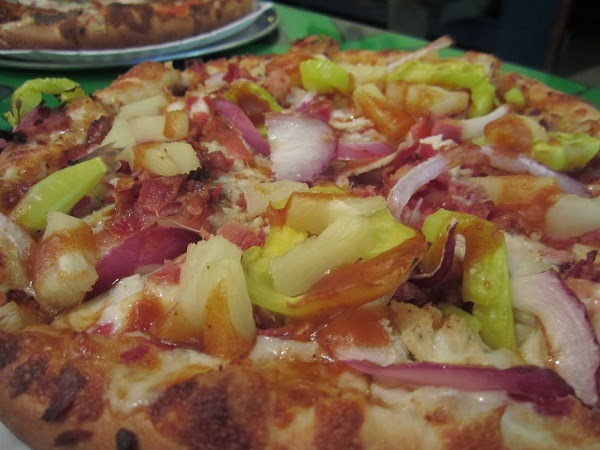 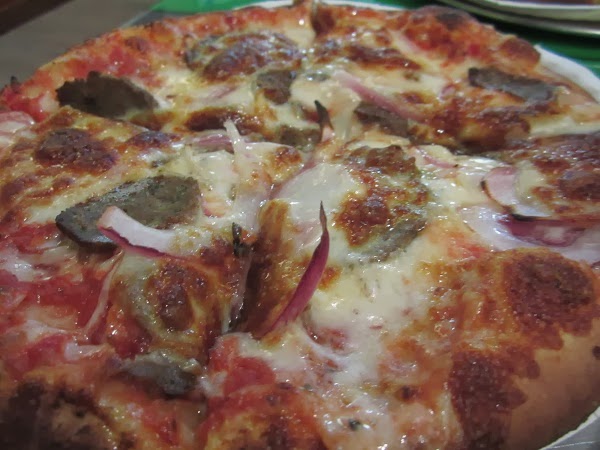 Marie usually has a Cheezapalooza pie, but this time, she went with the Moonbeam Meatball Dream, which packs in almost as much cheese: mozzarella, parmesan, and provolone with the traditional sauce, onions, and a double helping of meatballs. The baby got some of our slices and I don’t know that he was completely mad about them, but the girlchild’s evening plans meant that we got a later start to dinner than usual, and he was fairly cranky and irritable by the time our pies came.

Table space here is at a premium on Friday evenings, and the “delivery dudes” are in a constant rush in and out the door, but any other day of the week, definitely plan to head over here and dig into this menu. I’m already planning that my next one will be a Groovylicious. I’m looking forward to it immensely.