We have visited Asheville several times before. We have come up during the chaos and craziness of the Bele Chere Festival three times, and we’ve come to town when the city wasn’t being turned upside down by it. So we were a little surprised to see the downtown area almost as packed with people in November as it is during the last weekend of July. It turned out that we were in town at the same time that Widespread Panic was playing a two-night stand at the civic center downtown. There are street musicians all over the place in Asheville all the time anyway, but this time the whole city was singing with guitars and saxophones and dulcimers and washtub basses.

A little before four in the afternoon, in fact, with Marie in the long line for the French Broad Chocolate Lounge, the children and I walked north on Haywood to undertake a Baby Mercy Break in the public library. There was a quartet of musicians banging out some bluegrass in front of a giant crowd so thick with dozens and dozens of hippies and spreadheads with cameras and phones that we had to walk into the traffic to get around them. I don’t s’pose those minstrels were anybody we ever heard of, were they?

But I’m getting ahead of myself. The point is that the downtown restaurants were mostly all really busy, with hour-plus waits for tables at all of the really popular places. We’d decided that, since it had been more than two years since our last visit to the city, we’d pick multiple places for lunch, and that way, everybody would have a chance to get something that they really enjoyed, and I’d ensure that we still added a little new content as well.

Marie’s pick for her lunch was the hidden courtyard treasure of Creperie Bouchon, which she and I visited during Bele Chere 2011. 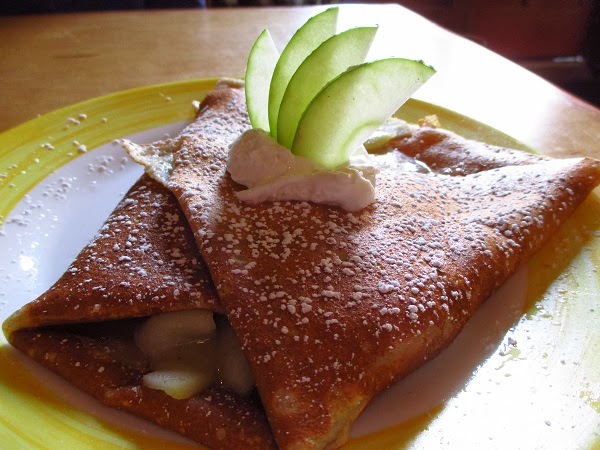 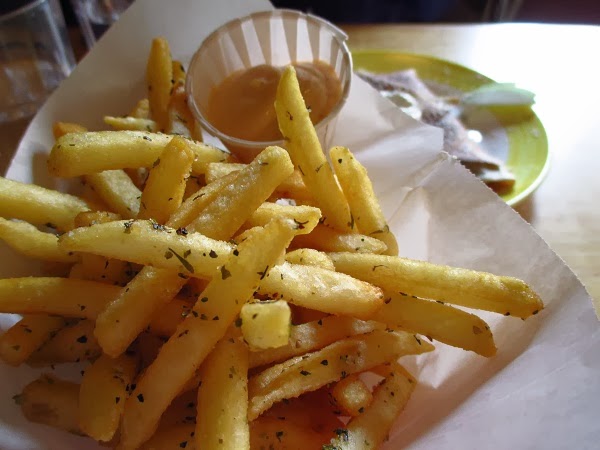 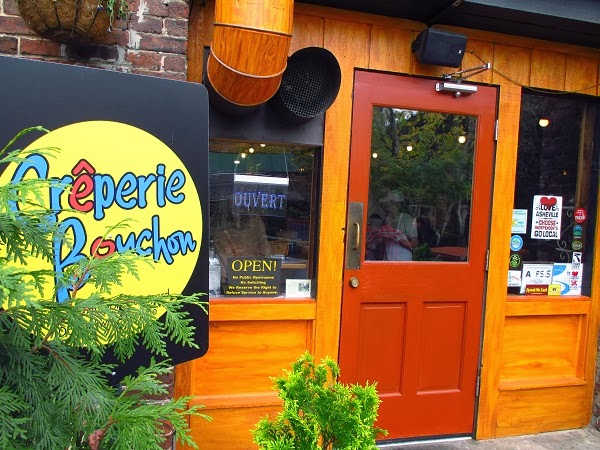 Michel Baudouin and Craig Peters opened this casual spin-off of Baudouin’s well-known, upscale bistro two and a half years ago. Since Marie enjoys crepes so very much, I was betting that she’d pick this for a return visit. Punched the air when I was proven right, I did. She ordered a sweet crepe with Granny Smith apples. Kudos to Baudoin and Peters for making sure this was on the menu during apple season.

I’d resolved during that first visit to try the restaurant’s lauded fries when we returned. Truth be told, they were less than I had elevated them in my imagination, but the children and I split a cone and the baby was awfully taken with them.

My own lunch came a little later in the day, but my next port of call, while Marie and the children went clothes shopping, was the Lexington Avenue Brewery. This was one of many places that we visited that was just too darn full of people. This really popular brewpub, which I believe opened in late 2009, is a favorite of beer lovers. I asked my brother, who works at Ale Yeah! in Roswell, what I should try, and he told me to get their Oktoberfest if it was available. Sadly, it was not, and as soon as a chair at the bar was free, I ordered a pint of their brown porter. 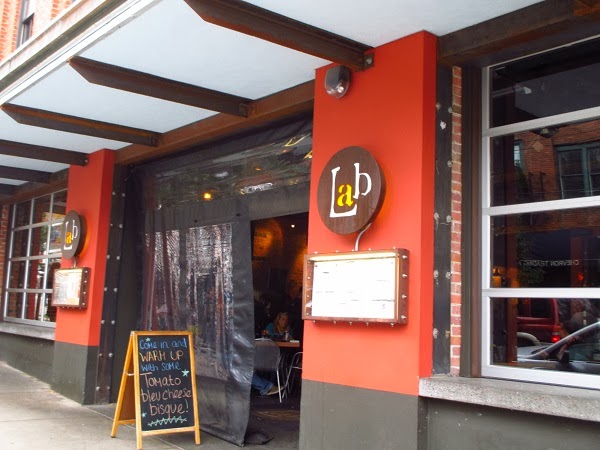 The beer was smooth and fairly medium in body, and I barely had time to enjoy any of it before Marie appeared, urging me away to inspect and approve a dress that my daughter wanted to buy. Maybe we’ll have another chance down the road, I said, quickly draining the last of it…

My daughter chose well – she’s dressing so much better as a high schooler than as a middle schooler, thank heaven – and it was time for her to get a bite to eat. She was very specific in her request. She wanted to go to two different places, but promised me that she wasn’t going to spend much money at all, so I okayed it. The first thing that she wanted was an order of mac-n-cheese and some chocolate milk from Early Girl Eatery. Marie and I first visited this popular place on Wall Street when we spent our first anniversary in Asheville, and we brought the girlchild to supper here later in the year. She says that she’d been craving their mac-n-cheese ever since. 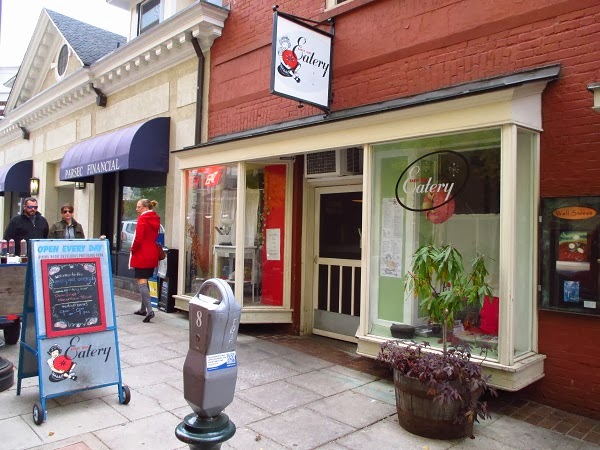 She’d also been craving the specific brand of chocolate milk that she’d had on that first visit, which we believe is Horizon organic milk. Well, I had no objection, although the hour wait for a table was a bit more than we wanted to bear. So while Marie and the baby sampled jams from a local vendor on the sidewalk outside, settling on a jar of blackberry, the girlchild and I placed a carry-out order for mac-n-cheese and chocolate milk, and we all met up on a bench nearby for her to enjoy her treat exactly as she wanted it. She even shared a bite or two with her brother. Somehow, however, I managed to spend too long trying to take a decent picture of the building and didn’t get a taste.

That’s all right. After another clothes-shopping detour, my own lunch, at downtown’s oldest restaurant, would be next.