For the final stop on the Eastern Suburban BBQ Tour, the children and I visited Glenn’s, a restaurant with a lot of local history which is hanging in there despite a long series of setbacks. As I enjoyed the finely chopped, hickory-smoked pork, I was reminded of the flavor and consistency of what I think of as “classic Atlanta barbecue,” as exemplified by such older restaurants as Old Hickory House. But it is not only the food; Glenn’s backstory also reminds me of that restaurant. Glenn and Jean Yontz opened the first location of this chain in 1987 and, over the next decade, various family members opened satellite locations throughout the suburbs. At its peak, there were five stores in the chain, stretching from Snellville to Stockbridge. The chain failed in 2005.

After four years, Jean and her son, Glenn Jr., reopened the restaurant in a very oddball building. From what I can determine, it had previously been the home of Shades Restaurant and Pub, and then an Italian place called the Red Tomato. Guests enter into a curious airlock with a really high ceiling, and there’s a door in front for a little lunchtime sub-restaurant called Green House, where there’s a smaller menu of organically-minded food. You then move along a long, narrow corridor, past the restrooms, to the actual dining area, where not nearly enough teenagers are on duty trying to manage the tables. 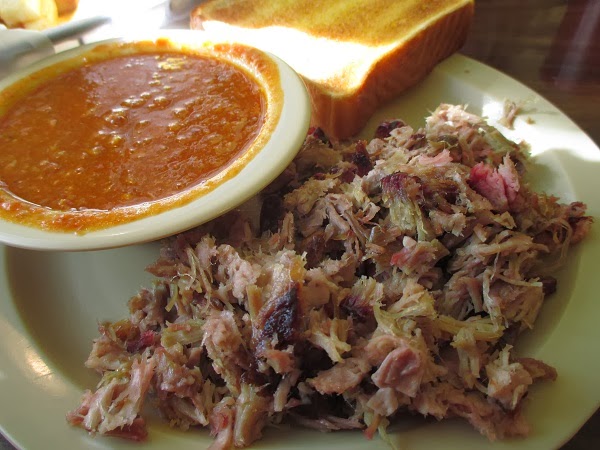 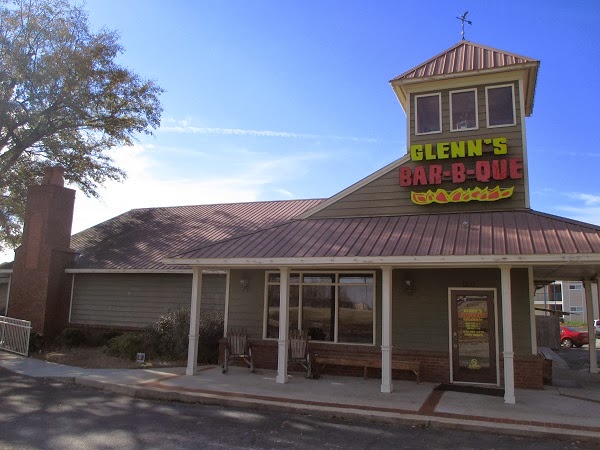 We arrived at Glenn’s a little after 1:30 and it was about two-thirds full, with only one server and one hostess attempting to organize everything. We didn’t see much of our waitress, basically. After having dessert at the previous stop on the tour, the girlchild was all set to order a loaded baked potato here, but unfortunately, they were sold out. I’d already settled on a very reasonably priced lunch plate of pork, stew and fries to share with the toddler – under seven bucks for a good amount of food – and figured she could just have some more banana pudding. She had made up her mind to order that when she noticed they had peanut butter pie. Oooh, that changed everything.

Having more customers than a business can easily manage isn’t a bad problem to have, but it was pretty unfortunate for us, and especially for the poor girl who had a completely gigantic order for a large party seated behind us and was forced to spend several minutes by herself trying to get each guest’s food to them. I’ve never actually worked food service, but I honestly believe that an order that massive should have come out with either a manager or somebody in the kitchen or that hostess to assist in delivering it all. The kitchen didn’t assemble the tray in anything like a comprehensible way for her to place the food, and nor was she comfortable or experienced enough to recognize each item. When I realized that nobody was either going to assist her or come collect our payment, I simply left cash enough for our food and a tip and we made our way. At the car, after strapping in the baby, we realized that we’d left his sippy cup behind. I went to retrieve it, and the poor girl was still navigating the trays of food by herself. I hope that the party was patient with the girl; it was not her fault. Somebody should have been providing backup. I was just glad that we weren’t paying with plastic; we’d have been there for a long, long time.

Okay, so that was a bit of a digression about the service that somebody else received, but that’s the thing about first impressions: you only get to make them once. And while Glenn’s is said to be beloved in Rockdale County, they haven’t attracted the attention of any other hobbyists among our fellows, nor even, at the time of writing, one single user review on Urbanspoon, and only eighteen votes in four-plus years. I have no idea how anybody feels about this place. Is service like this standard? I’d consult their Facebook page, but they haven’t one, only a “group” that somebody put together, which has seen zero posts since the summer of 2011. It’s like this restaurant opened in 1987 and wishes very badly to remain then.

Well, for curious guests willing to risk some serious service stumbles, Glenn’s does prepare some very good barbecue. As mentioned above, this is the traditional, classic Atlanta style of chopped, dry, smoky pork with three sauces available. There’s a dark brown sweet and a mustard sauce which are both pretty good. The hot sauce, on the other hand, is just amazing. It’s a hot tomato-vinegar-pepper mix like what I am used to seeing in northeast Georgia, and it mixes tremendously well with the pork. The Brunswick stew and the steak fries also reminded me of Old Hickory House in their heyday and were acceptable and fine, but this meal was all about the main course. Perhaps once somebody starts giving the floor staff the resources and support that they need to succeed, they could do a better job of letting the 21st Century know they’re in business and serving up a terrific plate of pork and sauce.