Hooray! The Villains have been vanquished!

Oh, wait, that’s not a good thing. What the heck has gone on?

It’s always exciting to get the clarion call of a lunch date! And when my fellow super-writer Serina from Hot Dish Review called for assistance last month, saying that she would be infiltrating the secret midtown lair of those arch-fiends at Villains, I sprang into action! Wasting no time – and, well, asking my boss if I could take a long lunch, thanks – I raced through the mean streets of midtown in another brave and bold teamup against the forces of darkness, evil, and tasty sandwiches!

We seem to have been successful. The restaurant is closing after dinner service tomorrow.

It was an interesting couple of years for the fiends at Villains. Their lair seemed more lived-in than it did when I made a couple of visits last year. The two sandwiches that I had tried – the roast pork El Guapo and the banh mi-inspired Colonel Kurtz – were still in the lineup, but I noticed that the awesome Kingpig of Crime is no longer here. Like any good Legion of Doom, the membership must rotate somewhat to keep the forces of good and niceness on their toes. On this encounter, I chose to match wits with one of the spiciest and most dangerous of Villains: the Odd Job. 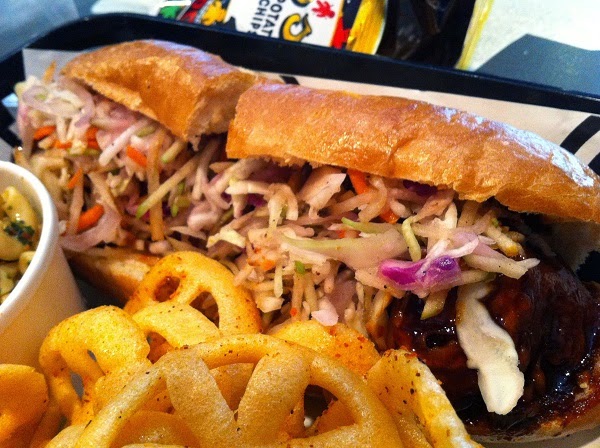 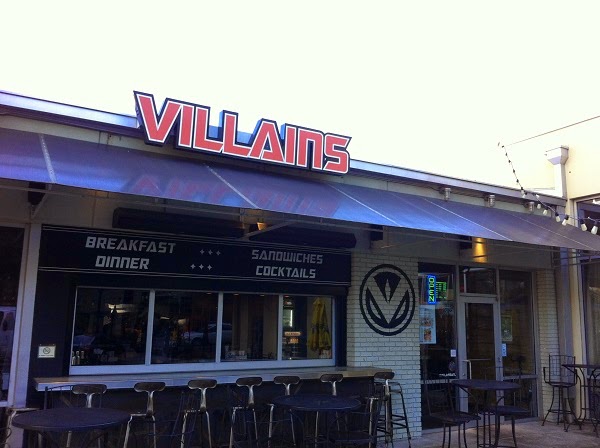 The Odd Job features fried chicken on the traditional crispy French bread, a spicy Korean-seasoned Buffalo sauce, pear slaw, mayo, and a steel-ringed hat used to decapitate statues. It is amazingly good. It comes with the wonderful little veggie chiccarones, and a choice of sides. I picked the cilantro-almond pasta salad and loved it completely. Incidentally, speaking of cilantro, my crimefighting partner enjoyed her Col. Kurtz, but felt it didn’t have quite enough cilantro to really do the sandwich right.

We talked of all the other nefarious ne’er-do-wells on the menu – a barbecue chicken sandwich with Alabama-style white sauce on Texas toast sounded especially wicked, and it’s named for that real-world jerkface who poisoned the old oak trees in Auburn – and bragged of all the other heroes in our circle who also need to infiltrate this Peachtree Street headquarters to do battle with the forces of insidious tastiness.

Perhaps the best time to come would not be during the lunch hour, but after work, when the celebrated cocktail list is better sampled. One of the cocktails is named for Stan Lee, but I’m not sure whether he gets that honor because he co-created such dastardly deviants as Doctor Doom, Magneto, the Kingpin, the Rhino, Doctor Octopus and… errr… the Space Phantom, or because he didn’t stick up for his artists as much as he should have after Marvel went extra-corporate and wouldn’t give Kirby all his artwork back promptly.

Alex Brounstein, owner of the business, announced his surrender not long after our visit. Business has been slow, and, according to Chris at Eater Atlanta, he plans to reopen soon, closer to the Villains’ “core audience.” Might I suggest the Town Center area, near me? I’m the core audience, right? I’d suggest a dozen or more fast food joints who could stand to leave their buildings to make way for Villains, but, heck, he’d be doing the world such a favor displacing one of the three (three!) Wendy’s within walking distance of my house that he’d have to change the name. I’d call such an action selfless and heroic, honestly. I guess if he really wanted to be wicked, he’d open up in Fairburn or someplace inconvenient.

Until then, the final night of villainy in midtown is tomorrow (the 20th). The space will reopen as Hi-Five Diner in January. This is a weird case where the bad guys lost, and so did everybody else. Best of luck to Brounstein in his next insidious plan.

After all, the very best supervillains never stay dead, do they?