I’ve been trying for years to get Marie to sample and enjoy Indian food, with no luck. Not even Chai Pani, our city’s (and Asheville’s!) best Indian restaurant, thrills her. So last month, she and Marilyn from Atlanta etc. were tossing around ideas for a Saturday lunch and settled, to my considerable surprise, on Purnima. It’s a Bangladeshi restaurant, which sounds pretty darn close to Indian to me. I double-checked a map of Asia and raised an eyebrow.

“I’d like to enjoy Indian food,” Marie told me, for the umpteenth time. “I don’t understand why I don’t like it. Maybe this is different enough from whatever it is that I don’t enjoy that it will please me?” Mm-hmmm.

I wrote Helen. I’ve gone to Indian restaurants with her and Vincent, without Marie, at least three times in the last year. “You’re not going to believe this,” I said. “Marie wants to try a Bangladeshi restaurant.” Helen asked where and when. This, we all had to see. Aggravatingly, Purnima doesn’t open until one on Saturdays, prolonging the wait to see Marie willingly order naan and curry.

Marie interjects, “That’s not fair. I like naan,” she reminds me. Yes, everybody does. Except the three year-old, the only kid I ever heard of who doesn’t like bread.

So we all, mostly, arrived at one. Marie was ten minutes late. A part of me figured that she stopped off at Northern China Eatery for some dumplings, just in case. 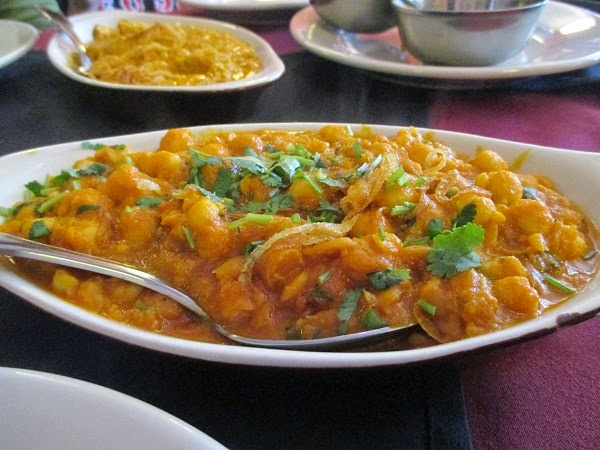 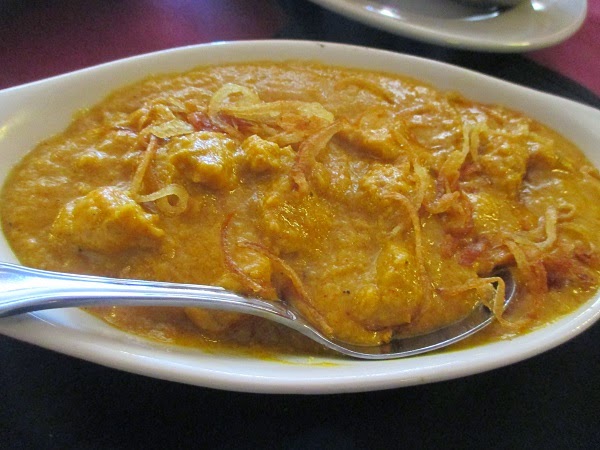 Purnima opened in late 2013 and was sold to new owners pretty early on. If you checked out Spatialdrift’s review of the place, they have since put up deep red wallpaper, got some new dishes, and raised prices across the board, at least three to four dollars, it would appear. On the other hand, everybody who’s come here before had commented how few guests there were, but the place was, happily, about a third full on our visit. Our server told us that the vast majority of their business is delivery, and my old friends CB and Elizabeth confirmed that they order from here all the time.

We started with enough shingara for the table to share. Shingara is the Bengal name for samosa, and while Wikipedia suggests that these are typically smaller than Indian samosas, they were as large as what most Indian restaurants in Atlanta will serve. Then we shared several bowls of entrees, including the chana Moshol-la that I ordered (chickpeas with grilled onion, tomatoes, ginger, and turmeric) and the fantastic, killer hot chana begoon that Helen had. This, which Emily at Spatialdrift had mentioned was a standout, is a chickpea and eggplant dish and it was just amazing. We loved it so much.

Marie ordered the coconut curry chicken – it’s the second photo above – and she really liked it. She can’t explain why the same dish at a restaurant that calls itself Indian and not Bangladeshi probably wouldn’t thrill her, but this was more than fine. If she did stop off for some soup dumplings, she didn’t need them. 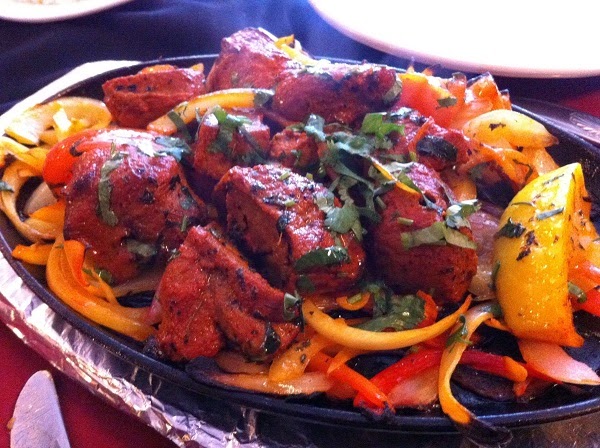 While the consensus favorite might have been either the lamb tandoori (above) or the chana begoon, everything we ordered was incredibly good. I won’t claim that any of us left understanding what, other than different spellings or terminology, differentiated this food from what we might have found at an Indian restaurant. Nor could Marie explain why she liked this better than any similar cuisine that she’d tried. “It was just better” was all that she could offer.

And, truth be told, it’s better than a whole lot of ’em. This was a fantastic lunch.