One day in late 2003, our friend David phoned me about a promising restaurant near us. He had read in Creative Loafing – just like you can – that this place, then called Cafeteria la Oaxaqueña, was serving a unique treat called a tlayuda. A common street food in the Mexican state of Oaxaca, it is sometimes called a Mexican pizza, not entirely correctly, and served as the inspiration for the tostadas that you see on fast food menus today.

Cafeteria la Oaxaqueña was then located on Spring Road in Smyrna, and our visit there was made painful by the horrible, horrible behavior of my two rotten kids. This was ’03, so they were six and four, and I’d split with their mother not long before, and they picked this opportunity to really test me. I don’t remember the tlayuda that we shared and doubt that I did for long; I remember pulling into a dry cleaner’s parking lot and taking some deep, deep breaths for a good, long time to cool down because the kids were so rotten! But I remember that I thought it was a shame that the business was gone a few years later, and pleased to learn that they’d actually relocated to Jonesboro. If only that weren’t on the other side of town… 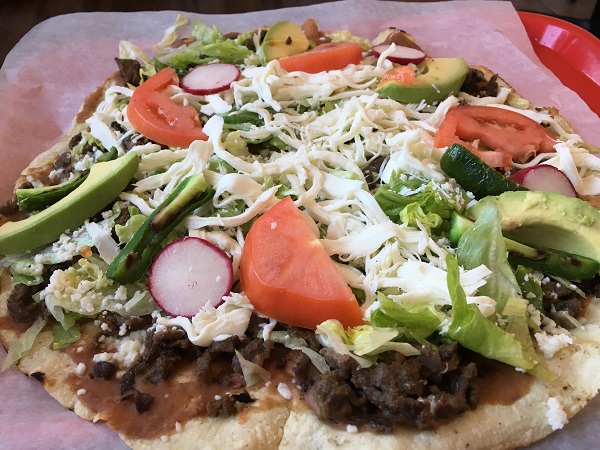 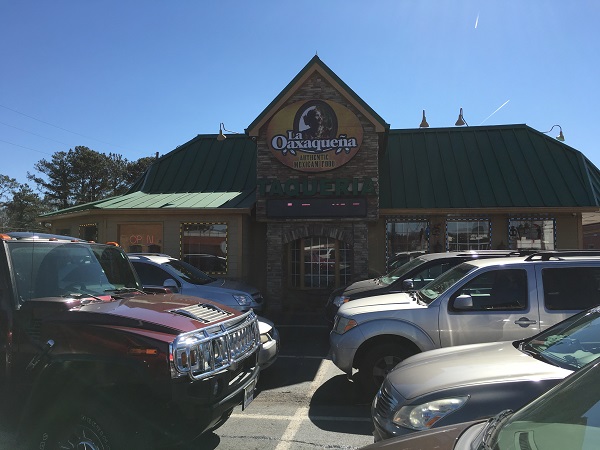 One day last month, I had a terrible case of cabin fever and wanted to take a day trip somewhere. Macon, Birmingham, Chattanooga, Montreal… heck, I just wanted to be away from town. David had demurred, because he really wanted to go shopping at Ella Guru, a record store on Lavista Road. This was not far enough away to satisfy my cabin fever. They have really good record stores in at least three of those proposed destinations – I can’t swear that Macon can boast such a place – but David couldn’t be budged. “Say, I don’t suppose you remember that Mexican place on Spring Road where we had the tlayuda thirteen years ago, do you,” I might have asked.

The owners moved in to an old Captain D’s and offer both table and counter service. David enjoyed some great tacos and tamales – they have a salsa verde tamale that wasn’t like anything he had tried before and which he really liked – while Marie and I shared a tlayuda, which was awesome. She chose grilled steak and really enjoyed it, even though she was not sold on the need to have sliced radishes on her side. I added some hot sauce from the really great salsa bar, which has eight or nine different flavors, and was completely pleased.

The cheese really makes it. This is really interesting. In the hands of a fast-food kitchen, somebody would either nuke this cheese – Oaxacan quesilla, apparently – until it melts, or dump some shredded stuff on top. The tradition here is to layer strings of the cheese across the toppings with a little more care and attention than that. It’s delicious, just a tiny bit salty, and it melts in your mouth. I enjoyed this a lot.

Incidentally, this place was absolutely packed on a Saturday afternoon. As we waited for our food, David wondered whether he might recommend this place to a co-worker who lives somewhere nearby. If the crowds are any indication, she already knows about it, and so do all of her neighbors.