When Grant was planning the itinerary for an afternoon together, he included Gigi’s because of my taste for sweets and our daughter’s more specific adoration of cupcakes. Sadly, neither of us showed much enthusiasm. The girlchild was under the weather and wanted to sit out this food trek, asking only for a comfort snack of Krystal to be borne home to her after we were done. In my case the problem was the memory of another dedicated cupcake store in Nashville. When I reminded him of that visit, Grant diplomatically replied that he understood I had been “underwhelmed” by that place. So I figured I would hold my enthusiasm until we went to his selection. More on that later.

Gigi’s is a small chain currently in 17 states, according to their web site, and they are hoping to add more franchisees to grow to about 100 stores. They have a rotating selection of flavors, so each day’s menu is different. The store plan for the franchise is cute, with just a handful of tables for those who want to eat in. 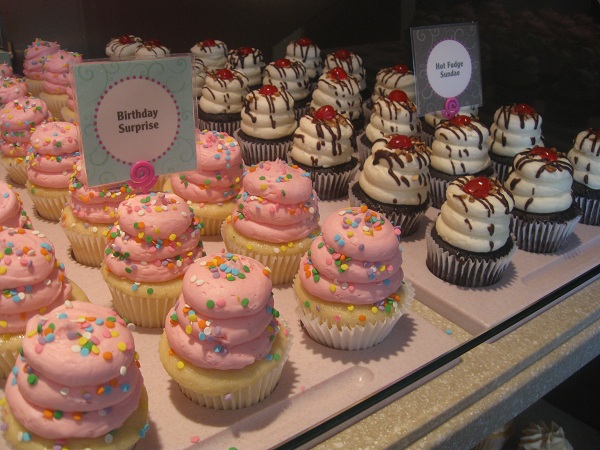 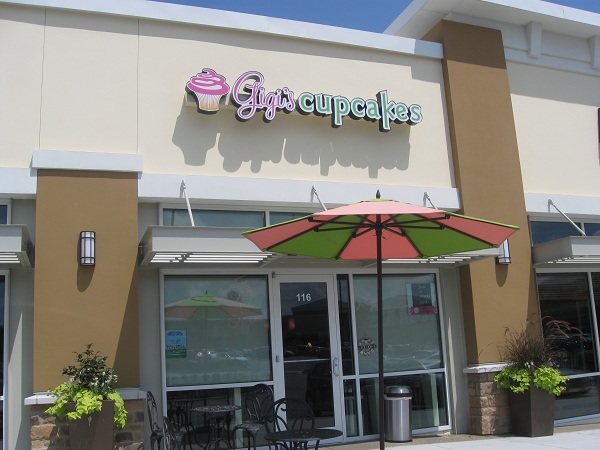 The special of the day had sold out by the time we got there after lunch, which was sad because I wanted one as soon as I saw the listing. The only flavor that goes better with chocolate than banana is malt. The sold-out special was not terribly surprising since the place appears to be popular; during the brief time we were there savoring our treats, we saw two small lines collect. However, despite that disappointment I was quite happy with the selection I made, hot fudge sundae, and likely would have enjoyed my second or third choice just as much. Grant’s cake was an orange creamsicle. He also pointed out that one of the other three Atlanta locations of the chain was on Hammond Drive, within walking distance of my work, and that he would like to have a cherry limeade (Mondays and Thursdays) at some point when it was convenient. According to the website this is one of their newest flavors.

The story of the chain as relayed by the site is quite charming – you should go read it yourself. However, since the first location was in Nashville, which is where the unimpressive cupcake store was located, I got curious and did a little Google map street view search in the general area where I recalled my visit a couple of years ago. We had, then, walked up to this cupcake store with our friend Brooke after shopping at The Great Escape, near Vanderbilt. I was horrified to learn that it was actually the original store in the chain! I will say that must have been an off day, as we have now bought a total of five cakes from two locations here in Atlanta, and all have been tasty.

They have a really clever flyer available by the register which has a picture of each of the season’s cupcakes with a description, so I picked one up to show to the girlchild and let her see what she’d missed. She drooled over the pictures and seemed quite enthusiastic about the idea of having one of these treats on a day when she felt better. We made plans for me to stop by the place close by where I work in order to get her the make-up dessert.

We’d had quite a cheerful day and the baby was exceptionally good, but had gotten a little overstimulated. While I was settling him down for a nap the Gigi’s flyer happened to be lying by the chair. It seemed appropriate to read each of the cupcake descriptions to the baby. This appeared to amuse both husband and daughter immensely, as they each wandered by my chair grinning during the reading. The baby smiled at Kentucky Bourbon Pie (I have to count that as his grandfather’s genes coming through – the gentleman actually owned some Kentucky bourbon) and laughed gleefully outright at the description of the S’mores flavor. With any luck the selection will be around for him to have one or the other as a first birthday cake so he can sputter over the candle, smash his cake with a spoon and put frosting in his ear while the rest of us eat our selections undisturbed by the damage. He might even get one of those flavors that seemed to please him so much, but one can never tell. The menu will have changed at least twice by then!

One thought on “Gigi’s Cupcakes”