I have a little goal here to visit and report upon one hundred barbecue restaurants before the end of 2011. I’m not sure whether we will make it – we’re almost three-quarters there – but any opportunity to grab one for the blog is one that we’ll try to take. Two Saturdays ago, I looked over the map and decided that we hadn’t trucked up GA-400 in a while, and I was curious what new restaurant developments could be seen on Windward Parkway. Alpharetta is the home of Smokejack Blues & Barbecue, a business seven years old which has expanded to a second location a little further north in the town of Cumming. Smokejack’s not getting quite all the press and attention among barbecue restaurants in that area right now – there’s a place called ‘Cue that everybody’s talking about – but I remembered having a pretty good, albeit pricy, meal there a few years ago.

When I worked in Alpharetta, there was one perk that certainly beat any that I have at my current job. To celebrate birthdays, our department would take all the staff out to eat once a month. She wasn’t with the company for really long, but I did have the pleasure of working with a girl named Kristi who was a completely fun trip, just overflowing with silliness, light, Southern slang and malapropisms. She chose Smokejack for her birthday and I remembered enjoying it greatly, even if the restaurant’s prices kept it out of my regular rotation of places to visit. Marie and I had lunch here for just under $30. That’s a heck of a lot to pay for barbecue for two, but in their defense, the restaurant tells guests up front that theirs is less a traditional BBQ place and more an upscale eatery that focuses on smoked meat. 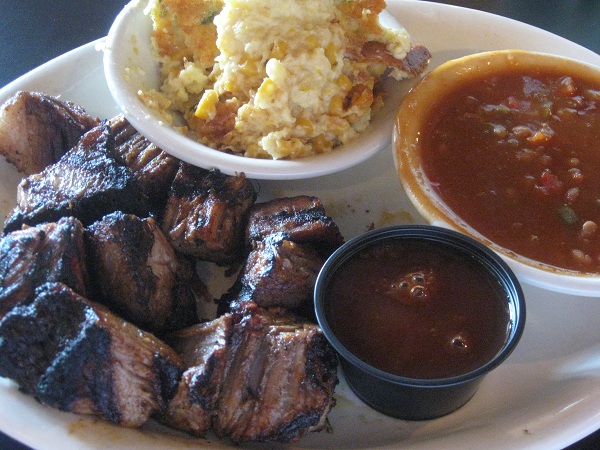 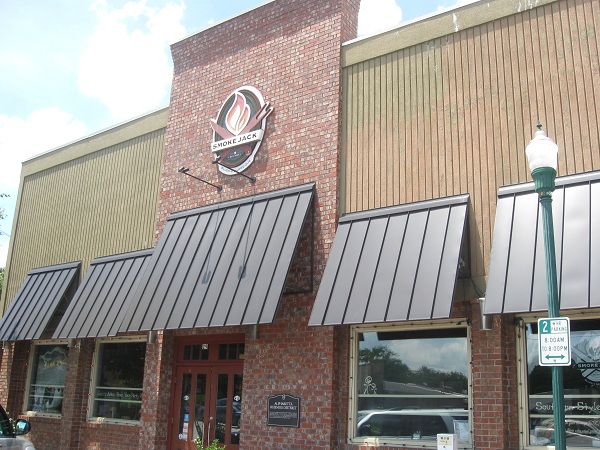 Marie and I hoped to have our daughter and our good friend Samantha join us for lunch, but each of them asked for rain checks in the end, not feeling well. So Marie and I made it a quasi-date day, with the baby bundled in the back seat and spent a few hours enjoying each other’s company and eating pretty well.

Smokejack, located in Alpharetta’s small, but very cute, downtown, offers the usual assortment of pulled pork or chicken dishes. Most of them apparently are sauced just before they send them out of the kitchen, but they’ll serve them dry if you ask. I noted that they have a chicken sandwich with white, north Alabama-style sauce, and while normally I might be expected to give that a try, I was really in the mood for another order of burnt edges.

I had these for the first time a couple of weeks previously at Woodstock’s Bub-Ba-Q and was curious to try another restaurant’s take. I had the sauce, a delicious black, sticky-sweet Kansas City-styled goo, on the side. The beef was so good that no sauce was necessary, and I strongly advise anybody curious to order this dry. I had the burnt edges with baked beans, which were pretty ordinary, and a very tasty corn pudding that Marie and I shared. She ordered chicken thighs from the appetizer menu. These came with an orange habanero glaze and were served on a bed of pretty good slaw. She also had a side of wood-roasted vegetables that she mostly enjoyed. Brunswick stew is available, but, sadly, with a small additional charge as it is not technically a “side,” but rather a “soup.”

A little driving around town didn’t convince me that I was missing very much, foodwise, by leaving my job in Alpharetta. We got back on GA-400 and made one more stop in the area, though. Two days previously, I had visited one of the wonderful Taco Stands in Athens. They had opened a store in Alpharetta several months earlier. I had stopped in and was pretty disappointed, but chalked it up to opening week catastrophe. I was curious, now that they’ve hopefully got their act together, how they compare to one of the originals. 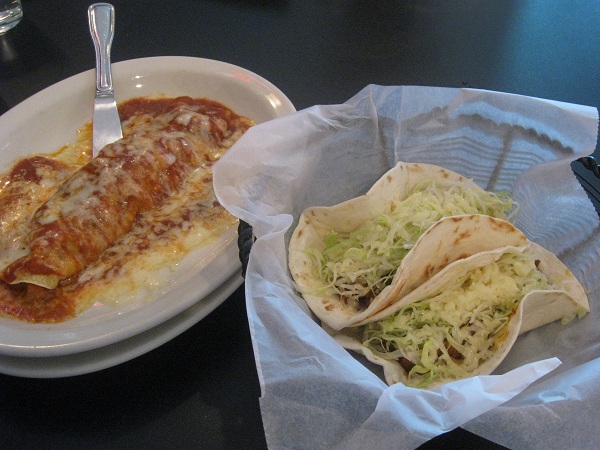 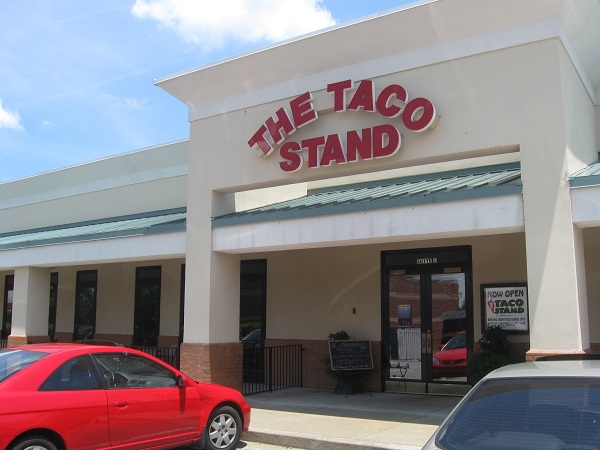 The honest answer is that they compare poorly, but are still pretty good. It’s a very different sort of restaurant to the Taco Stands of Athens, or even to the since-closed Buckhead watering hole. It tries to be a lot – upscale and family-friendly, even offering X-Box games for children – but it’s all so unnecessary. The prices are disagreeably higher than the originals. Seriously, a taco, $1.39 at Barnett Shoals, runs you $1.99 here. If I’m wanting Taco Stand, I don’t need an airlock and hostess station, I don’t need my tacos served in a little IKEA basket, and I don’t want to tip a server. I want my name called and I want my tacos on a tray.

There are certain realities of eating that trump fancy-shmancy considerations. Admittedly, the prime ingredient in the Taco Stand is nostalgia, but you can’t deny the awesomeness of the chicken enchilada and its wonderful dark sauce. On the other hand, while the tacos are good, they are nevertheless different, and in fact, inferior, to the tacos in Athens. They’re served on grilled flour shells rather than hard corn, and the beef is markedly different. The sauce tasted the same to me.

As much as I like the food, I really just don’t feel like the Taco Stand transfers well to this type of environment. I’ll forgive a lot for a good chicken enchilada like this, but in much the same way that a Burger King Whopper doesn’t gain anything from being served on a nice white plate, remaining, at it’s core, fast food, this “upscale” store doesn’t make the scruffy, tasty, wonderful food any better. It just makes it more expensive.

Other blog posts about Smokejack: