I felt a little rotten about David. The last time we went out to eat with him, he wasn’t all that enthusiastic about going to Johnny’s Bar-B-Que and Steaks, and while I enjoyed my meal and was curious and excited about this very localized style of barbecue, I couldn’t help but notice that he only said that his steak was pretty good.

Now, some of you dear readers have commented about what has been perceived as my tendency towards damning with faint praise. Naturally, of course, body language is invisible in blog posts, and you can’t hear my often excited voice gushing with praise. I have a tendency, it’s been noted, towards hyperbole. I try to temper that a little, but basically, when I say that something is pretty good, you can usually read that as though italicized and emphasized, with a silent “damn” in the middle. Unfortunately, when David says that something is pretty good, he might well be saying it with all the enthusiasm of Eeyore offering thanks to Pooh for reattaching his tail. His manners are impeccable, but I’ve known him for a decade. He didn’t want to eat here, and he wasn’t pleased by his supper. Clearly, I needed to make this up to him.

So when we next had a free day in town, I suggested to Marie that I make myself scarce and make that meal at Johnny’s up to David. I didn’t know where we’d go or what we’d eat, but wherever he wanted to go was absolutely fine by me. Happily, David’s taste is just about as impeccable as his manners, and I was comfortably assured that I’d enjoy wherever we went, and get a nice experience to share with you all.

We went to Sausalito West Coast Grill, which is in midtown on Peachtree near 17th Street, sort of catty-cornered from the High Museum of Art. I’m reasonably sure that once upon a time, there was an ice cream place in this space, and on the side of the building, there was a delightful neon sign for it. Next door to Sausalito, there’s a Subway. How anybody can eat at the Subway with Sausalito sitting right next to it and still look at themselves in the mirror is a mystery to me. 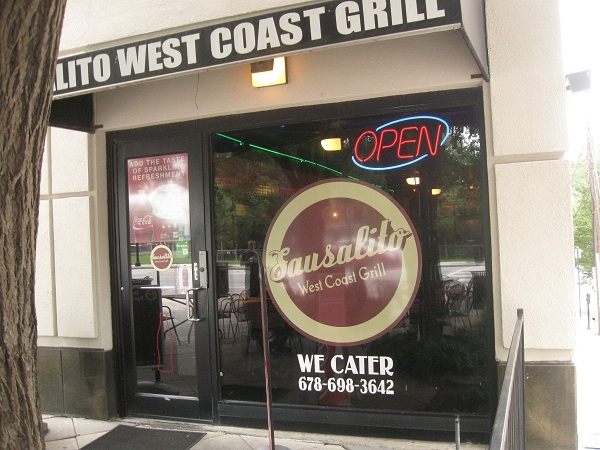 The menu here is pretty dense, ranging from the usual Cali-Mex burritos, tacos and nachos to dishes from Chile, which is where the owner was born. He greeted David like he was his oldest and closest pal. David works just up the road and has lunch here two or three times a month. Noticing how I was lost in the menu, the owner asked whether I like chicken. I said that I certainly do, and he sliced a little taste, about the size of your index finger, and grilled it quickly, offering it to me with a toothpick and a tortilla chip. It was really wonderful, seasoned just perfectly and cooked just right. A taco filled with this meat would indeed be something else.

However, I did not get to try that. I enjoyed something even better. David insisted, quite rightly, that I order a sandwich called the Sausalito Lomito. This is sliced, marinated pork sirloin served on a bun with lettuce, tomato, guacamole and a really good chipotle mayo. Oh, heaven, was it ever good! It comes with a heaping pile of yellow rice and black beans and all the chips-n-red sauce that you care to eat and a small salad. I had the blackberry habanero dressing, which you simply must try. Four alarm and fruity, how nice!

The prices here are admittedly on the high side for this style of food, but budgeting eaters – as I often am – can just get a taco or two for two bucks and change each. This is one of those occasions where the price tag is definitely worth it, though, because they do such a good job with their grilled meat. Heck, if I worked at the High, I’d be over here all the time. The design is interesting. It looks extremely corporate, thanks to signage and table wraps paid for by Coca-Cola. I think this must be the modern, intown equivalent of the old white grocery store signs that you sometimes still see around the south, with little red “Coke” squares on either side.

David certainly picks good places to eat. I’ll give him a holler next time I have a free afternoon and let him pick again. You should probably get to know him and let him recommend some places for you, too.