The real world had been doing that stupid thing that the real world sometimes does. It had been ages since I saw our old friend David; I suggested that we have lunch, and he suggested we meet up at a place near the Big Chicken called Presto. It’s a general “Latin” restaurant that is principally Columbian, but they offer recipes from Mexico and Cuba and everyplace else south of Florida. On weekends, they not only have live music, but a number of traditional Columbian soups and stews.

I had mentioned this building, which was once a Hardee’s, last year when I visited Chicago Delights, which was once an Arthur Treacher’s, across the street*. That very good hot dog place has moved a little further down the street, away from this Not-Fooling-Anybody intersection of repurposed fast food buildings.

On the phone, David told me about a very good sandwich that he’d enjoyed here the week previously. They make a Pan con Bistec using grilled palomilla steak, Swiss cheese, garlic mayo, grilled onions and little potato sticks to give it a curious crunch. I was briefly tempted by their traditional Cuban sandwich, because, the Friday night before, Marie and I took the baby to supper at the Crazy Cuban on Powers Ferry, only to find that their Facebook page was confusing and it’s actually just the Midtown location that’s open for supper. Well, we ended up at Heirloom Market BBQ for dinner instead. We had no complaints. But I was still sort of wanting a Cuban sandwich. As of this writing, I still am… 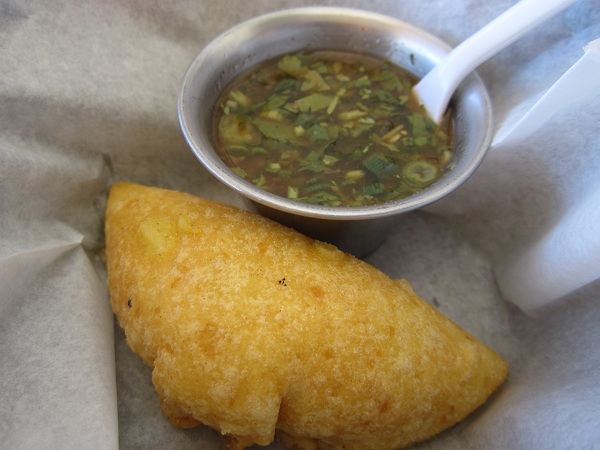 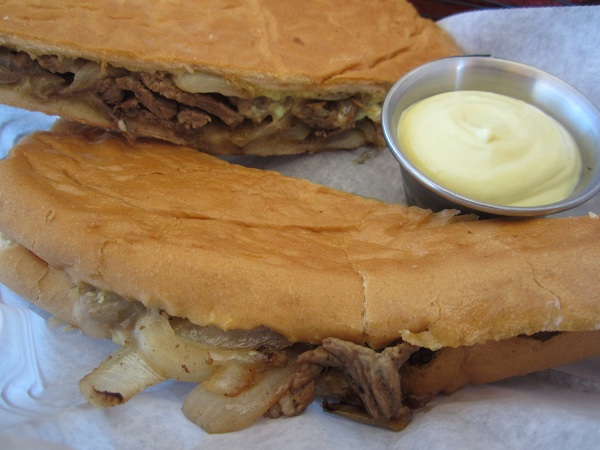 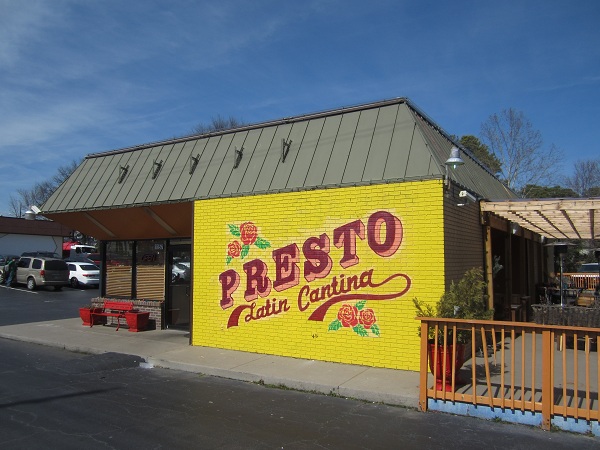 But it didn’t take much to persuade me to give the beefsteak sandwich a try instead. David generally knows what he’s talking about. He was conversing with the owner and manager, Lucas Mejia-Angel, when I arrived. He’s an outgoing and fun guy, and seems to enjoy this location more than the shop’s original one, just up the road. When Presto originally opened maybe a half mile away, near the Harry’s / Whole Foods and Baldino’s, it was a much simpler and smaller fast food joint with a shelf or two of conveniences and sodas. Now, they have a much larger kitchen and have a much larger selection of dishes.

David was still on breakfast o’clock and so he enjoyed a gigantic dish called Calentado. This was rice and beans with chichoarrón, scrambled eggs, and an arepa with queso fresco, and he supplemented that with two smoked sausages grilled with lime. I had a bite of the sausage and can confirm that it tasted wonderful.

My sandwich was very good. I enjoyed the empanada most of all. I ordered just one as a small appetizer. They’re just $1.25 apiece, or $10 for a basket of ten, and they’re served with a small bowl of a thin dipping sauce called aji. I had never heard of this before; it is principally made with vinegar, water, and lime juice. Other ingredients will vary depending on the house recipe, but the ones that I see online usually include a pepper, vegetable oil, cilantro, and sugar. Lucas suggested biting the tip from the empanada and pouring a small amount of the aji inside. It really was tasty.

This was a very good meal and a fun visit. David’s usually got good ideas for places like this to go. Should probably get ideas from him more often, really.