Marie’s mother was coming to visit. One of her friends on Saint Simons Island was coming to Atlanta to address the Rotarians or the Rosicrucians or the Romulans or somebody at an airport hotel, and she caught a ride. I volunteered to go pick her up, since, downtown, I’m closer to the airport than Marie is. Plus, there was a restaurant in Hapeville that I had been wanting to try.

Slideways opened in 2012, and an online buddy of mine, Barney, had given it a nice review on Urbanspoon. I liked the idea of a locally-owned burger joint that sets itself apart from the competition by focusing on small-bite sliders. David Thomas and his sister Jennifer started the restaurant with the nice idea that it’s easier to try more things on the menu when the portions and the prices are smaller. For ten dollars, you can get two different sliders, a side, and a drink. It’s a shame that online jerks have complained about the cost-value ratio there, comparing this, wrongly, to fast food. I look at it this way: many ITP barbecue places will give you one meat and two sides for ten or eleven dollars. Slideways offers just as much food as those restaurants at an equivalent price point.

I chose the Juicy Lucy and the Southern burgers. Since they’ll make a Lucy with either beef or turkey, I chose turkey. Whenever I have tried one of this style of burger, I’ve found that the novelty of the oozing cheese is little more than a cute idea, but it certainly tasted good. Even better was the Southern, a beef burger with bacon, pimento cheese, and a little just-enough-to-taste amount of a bacon-flavored mayo. This was a perfectly fine lunch, served up by a pleasant and upbeat staff. Unfortunately, their hours are not very accommodating for people on my side of town (10:30 to 2:30, Monday through Friday), but should you have business in Hapeville for a weekday lunch, this is a good idea. 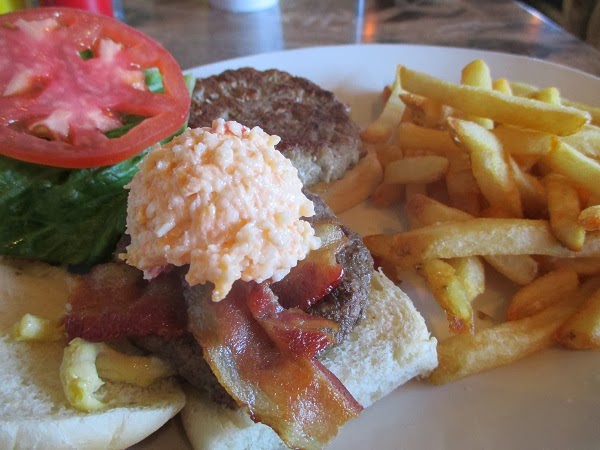 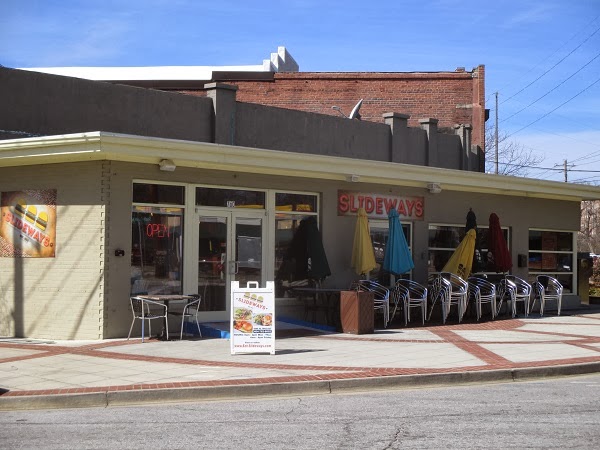 On one of the walls, there’s a huge infographic (I guess you’d call it) noting David and Jennifer’s family history with area businesses. Surrounded by large photos of Hartsfield Airport as it appeared in the 1970s, there are also pictures of their father and grandfather, who ran Thomas Restaurant. The original Thomas Restaurant was open in Hapeville from 1963 to 1987. A second location, located inside the state farmers’ market in Forest Park, lasted from 1980 to 2006.

So, the plan at this point was to drive over to the hotel and park myself in their lobby with a book until Marie’s mother and her Romulan friend arrived. For my sins, I was reading, among other things, a memoir by One Day at a Time star Mackenzie Phillips, in which she details how she took all of the drugs that you didn’t. Unfortunately, the hotel was one of those with a really expensive pay lot, to discourage airport travelers from sneaking a space, so I drove back to Virginia Avenue and parked in the back of a Cinnabon at about one o’clock for what turned into a really long wait. I was looking out at the original location of Grecian Gyro, which opened in 1982. After about an hour, I started wondering what the food tasted like. I think I was starting to get the munchies by proxy, reading about all these drugs that Mackenzie Philips did, but Marie’s mother was due any minute now and didn’t want her to phone while I was one bite into a meal.

The minutes turned into hours. I finished one book, and watched a group of teenage girls on Grecian Gyro’s patio engage in a remarkable confrontation. One of them had yelled at another by phone, sort of a “you come here and say that to my face” thing, not expecting her target to show up and do just that. Her three friends had the good sense to escort her away and not engage with the newcomer any longer. The newcomer had much to say, at maximum volume, to their retreating backs, not one word of which can be repeated in a family-friendly blog like ours.

Two and a half hours passed. I’d finished my other two books, and Mackenzie was confessing to a deeply unsettling relationship. I got a text at last that I’d be waiting another forty minutes, minimum. I closed the book and moved the car. I had to get something to eat. 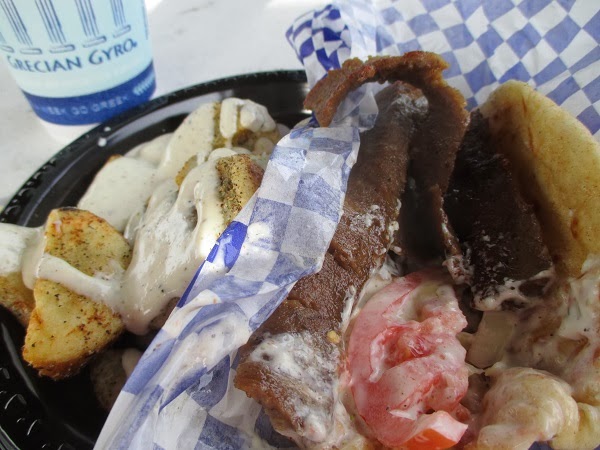 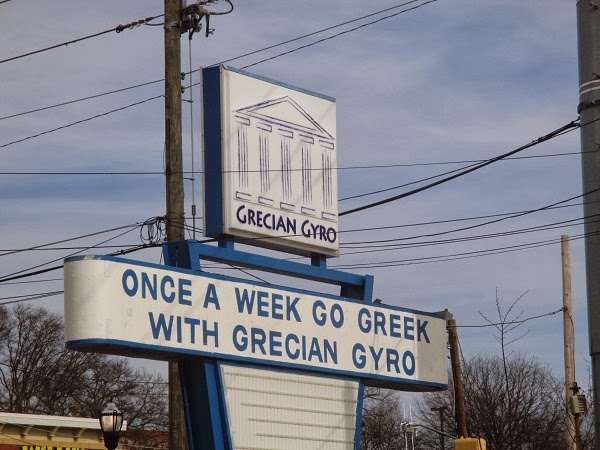 Nick Koulouris has been winning awards from Atlanta’s print media for more than three decades. His gyros are often said to be among the best in the city, thanks to a wonderful seasoning mix and white sauce. He opened this store in 1982 and four additional stores have slowly popped up since then. The first two, in Forest Park and in Tucker, are corporate stores. The newest members of the chain, in Johns Creek and in Dunwoody, opened in 2012 and 2013 and are franchises.

Restless, I was brought into the store over two of its neighbors which I enjoy (Hambones and Pit Boss BBQ) by that awesome slogan on the sign. I love that! Does anybody know what was in this building in the 1960s and 1970s? I wonder whose sign that originally was. Possibly a Krispy Kreme?

I thought that the gyro meat was pretty good, although I have had better, but the sauce was completely excellent – much more tangy than traditional tzatziki – and those potatoes are worth driving across town to try. Once Marie’s mother got settled in, we enjoyed visiting some family favorites near to the house over the weekend, but those potatoes were the best thing I had for days and days. I imagine that I’ll stop by the Dunwoody store sometime in the future for more of those, and perhaps try something else from their menu.

Marie’s mother finally arrived a little after four. Those of you familiar with Atlanta’s traffic patterns will note that we then had to get from Hapeville to Kennerietta at that time of day, on a Friday. It’s a good thing that my mother-in-law seems to like me, because she was stuck in the car with me for a long, long time.

Other blog posts about Grecian Gyro:

4 thoughts on “Hours and Hours in Hapeville”