As soon as I realized that one of the five Grecian Gyro locations was just one exit away from Marie’s work, I schemed to get over there and have supper. Every once in a while, I like to go pick her up from work and spare her the awful, lonely, Friday evening commute home. She certainly seems pleased to have me and, often, at least one of the children pull up to give her the break. Unfortunately, on this instance, the toddler fell asleep on the way to Dunwoody. We had a bad feeling that he was going to be a Mr. Crankypants when he woke, and we were right.

Toddlers are so fun. We walked back and forth the length of the outparcel strip mall where Grecian Gyro moved in last year, hoping a little exercise would refresh him a little. He didn’t want to walk. Nor sit, nor lie down, nor eat, nor sleep. He just wanted to grumble and whine. When Roger and Eve, our friends from Friday Date Night (here’s their post about it), arrived to join us, he was still nowhere near sociable. This forced us into the wincing smiles and awkward chuckles of “He’s not normally this grouchy, honest, ha ha heh…” But all parents understand.

After Grecian Gyro opened its third store, the owners began offering franchises. This isn’t technically owned, in other words, by Nick Koulouris and his family, though the Dunwoody store is using his recipes.

Grecian Gyro falls into a strange hole in Atlanta restaurant coverage. Throughout the 1980s and 1990s, it was mentioned regularly by the city’s print media as one of Atlanta’s best places for Mediterranean food, but it started to fade from view through overuse and a desire for new things around the time that the first wave of Atlanta bloggers and hobbyists started writing around 2005-06. (Pretty much all that I could find, I listed when I wrote about the original Hapeville store in March.) It’s really unfortunate that the restaurant seems to have slipped between phases; not as many people are experiencing or writing about this place as they should. 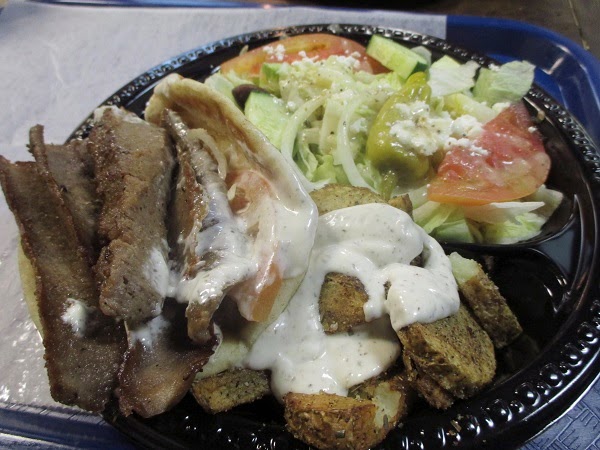 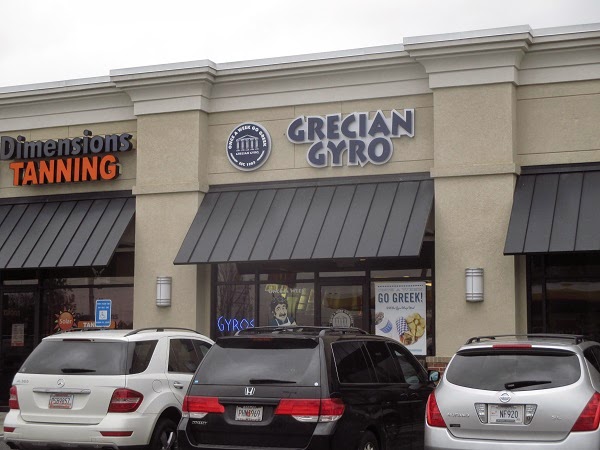 Unfortunately, I’m going to have to say that Grecian Gyro is best experienced in Hapeville. This store in Dunwoody is pretty good, but it’s a dull and soulless corporate fast food place. The gyro meat was not at all bad, but I liked what I had in Hapeville better. The potatoes are just as terrific, and I love that indulgent, can’t-be-good-for-you white sauce that they drown the potatoes with, but that dingy diner near the airport has character and life and verve, and this place doesn’t. Each person in the crew does the job well, and efficiently, but you kind of could tell that everybody wanted to go home. I think it’s probably better earlier in the day, too, before the meat starts to dry out. Marie, sad to say, wasn’t taken with it at all. She ate enough to be diplomatic, knowing how I love these potatoes.

Dessert went over considerably better, but even the mighty Morelli’s Ice Cream let her down. The five of us walked across the parking lot to get some ice cream and the toddler finally brightened up a good bit. He didn’t eat very much, but just enough to bring some sunshine back. Everybody was much more pleased with the excellent desserts here. Almost everybody. Unfortunately, Marie was less than thrilled with her usual chocolate-and-banana milkshake. We had a new guy behind the counter who was unclear on the concept. We realized after we sat down that the fellow made a chocolate milkshake and then just dropped a banana in it. He didn’t slice it or blend it, just sort of… plopped it in there. Just as well Morelli’s makes one of the best chocolate shakes in the city, really. You could plop just about anything in it – some cherries, half an apple, maybe an old sparkplug – and you’d still have an awfully drinkable dessert.