Not too many weeks ago, I was idly clicking around one of those Wikipedia boxes about, ahem, “chicken-based restaurant chains” – how glamorous does that sound? – and read about the Texas-based chain Wingstop for the first time. The first store in the chain of 600-plus stores opened in Garland twenty years ago. I was surprised to learn they had a presence in Georgia, and even more surprised that there was one just on the other side of I-75 across from Kennesaw State.

They sure have been going about their business quietly, at least in the Atlanta area. The chain has opened six stores here in the last eighteen months. There are also shops in Columbus, Augusta, and Hinesville. In other markets, they’re much better known. NFL legend Troy Aikman stars in their TV ads in Texas, the Seahawks’ Sidney Rice owns five stores in Seattle, and even in little Stockton CA, the restaurant has a partnership with the ECHL Thunder. Here, I’m afraid, you’ll just have to settle for me. Their PR company sent me a gift card to apply toward the cost of lunch and we went to try their new limited edition chili lime flavor. 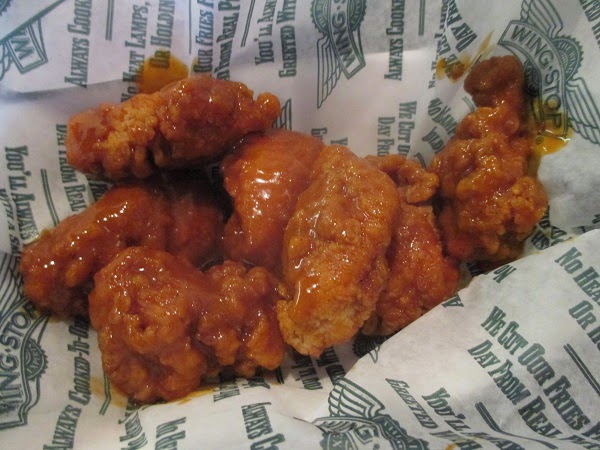 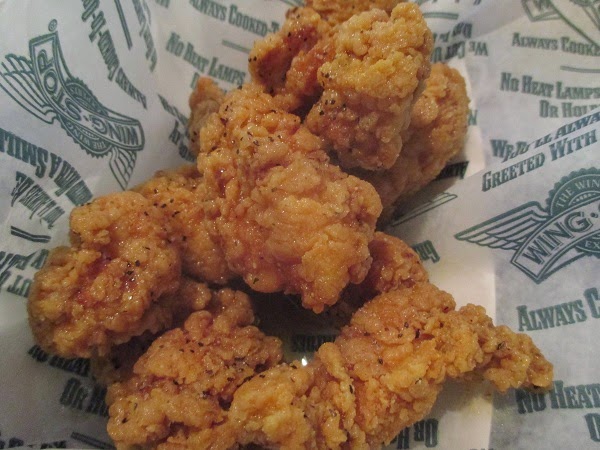 Wingstop sets themselves apart from their competitors by cooking everything to order. There are no heat lamps and no microwaves in their kitchens, and they also hand-cut their own fries. They offer wings, traditional or boneless, in ten flavors with one or two limited-time specials. Chili lime is the current one on offer; I believe that it replaced mango habanero on the menu.

Our feelings on the food were positive but mixed. We ordered a few of the chili lime, along with mild and lemon pepper flavors, in a reasonably-priced $16 combo meal. That gets you fifteen wings in multiple flavors, two dipping sauces, a giant boat of fries, and two drinks. We added another five wings and some carrots and celery, in part because the fellow working the register was pretty much the best upseller that I think we’ve seen anywhere in years. By the time he was done, I was grateful he hadn’t offered to sell me his car, because I’d have probably said yes.

In fact, the service was downright great across the board. Unfortunately, there was something of a slip between the counter and the kitchen, and our order was fumbled. They bent over backwards to recover, and they did it smiling. The crew here is just awesome. Do you, reading this, own or manage a fast food franchise in the northern suburbs? You need to go here as a “secret shopper” and watch these fellows at work. 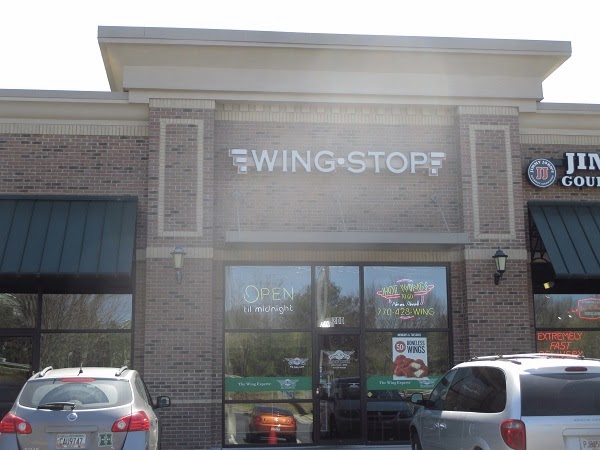 As for the food, Marie felt that the chicken was all pretty good, but too salty for her taste. She was, however, totally sold on the fries, which are better than 99% of the fries out there. On the other hand, I didn’t think that the wings were notably salty, but the lemon pepper wings could have used just a little less of the flavoring. The mild wings were completely perfect, and the chili lime pleasantly surprised me. These were just spicy enough to have an edge, with the lime evident as a tart little accent.

This location seems to do most of their business in carry-out. They’re set up so you can order online, and students in the nearby residence halls certainly know about that already. They do good work here, clearly on a higher rung than the wing places that I would visit when I was in college.

Other blog posts about Wingstop locations:

(As noted, this was a media event and our meal was in part complimentary. It’s our policy to always note when we’ve received our meal without charge. If you would like to invite us to your restaurant’s media events, please drop Grant a line at gmslegion@gmail.com .)