This is Marie, contributing an article about a visit we made with our friend Louis to G. D. Ritzy’s for a cheeseburger and a snack for the 4-year-old, who’d been muttering about the food in the other places we ate and was wasting away on us. If we’d had any sense we’d have come for the ice cream, but then that’s my prejudices in favor of dessert coming out!

The restaurant that we visited is one of the few survivors of a chain that was popular in the midwest and middle Atlantic states in the 1980s. It was started by a former executive at the Wendy’s corporation named Graydon Webb. The first G.D. Ritzy’s opened in Columbus OH and there were nearly 100 locations at its peak. Today, there is one survivor in Huntington WV, one and possibly two in Owensboro KY, and three in Evansville IN.

The guys spent a good bit of the meal talking fondly about Cincinnati chili, which isn’t my thing, while the boy and I chowed down on our more conventional fare. The chili here is not actually Cincinnati-style, but, like the chain Steak ‘n Shake, they serve their traditional chili in the way they do it in Cincinnati, over noodles or as a four-way. Grant was not planning to eat here, but he got a bowl to see what it was like. This is definitely better than the average fast food place. I love the retro decoration, and it was also nice to see the separation between the eating area and the line at the counter which never quite went away during our visit. 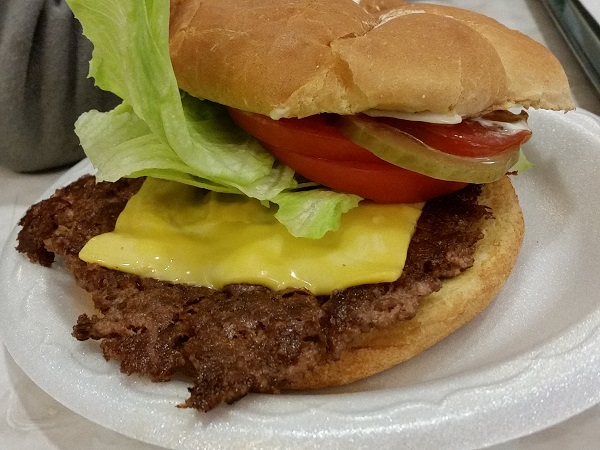 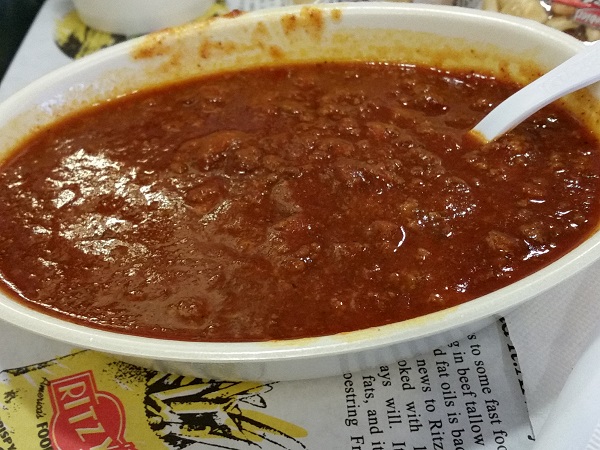 The burgers are made in view of the order counter too, which I like. The burgers are the thin crispy-on-the-edges style, which I haven’t had very often but hit the spot this time, and came with practically a whole salad’s worth of toppings, so it almost counted as a healthy meal. Technically. If you squinted… The shoestring fries are pretty good too, though you can’t eat them and still pretend to be eating sensibly. 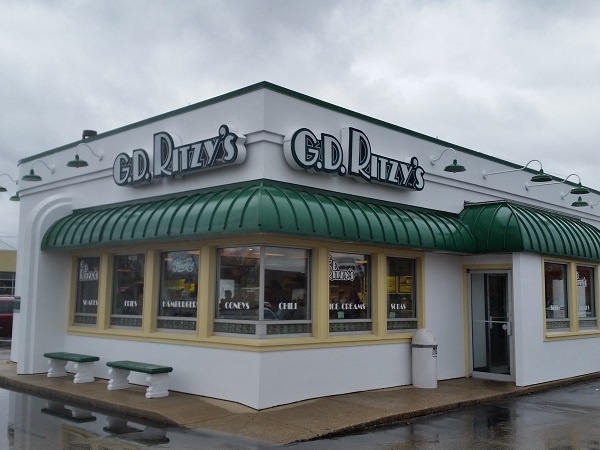 They make their own ice cream at a plant located next to one of the other stores. Although I ogled the ice cream case we wouldn’t have had any if it hadn’t been for the ticket in our son’s meal for a free scoop with his kid’s meal. I tried a couple of flavors and was really impressed with the texture. It’s well made stuff. They actually have two different vanilla ice cream flavors, one made “Philadelphia style” and it is something special. Philadelphia-style ice cream is made without eggs, and according to Turkey Hill Dairy, it means that the ice cream is not as rich, but more intense in flavor.

The restaurant seems to quietly go by the name Ritzy’s rather than G.D. Ritzy’s, based on the absence of initials on their cups and other gear, probably because of the immediate association some folks have with the initials G and D together – though that may only be among the prudish folks among us. I find that amusing, though.