When I was a cubicle farm dweller in Alpharetta, I would often head east on Windward Parkway and enjoy a really good lunch at Papouli’s. It’s located in a large and nice strip mall, where the restaurant failures are many, and cannot be counted on two hands. The supper traffic along this corridor is practically non-existent, so unless a manager can keep a number of big catering accounts or have a thriving after-work scene with drinks specials, their restaurant could be in trouble. Papouli’s has neither, but it still thrives.

I would eat here about twice a month, really enjoying the chicken souvlaki and, especially, the gyro plate. I never did understand why they never invested in some salt and pepper shakers for the tables instead of little paper packets, but I kept coming back, and eventually started wondering about the restaurant’s original store down in Macon. I understood that Christopher Katras’s parents, who co-owned this location with him, still ran that store, which opened in 1986. I imagined that the original store might have been in some quaint, sleepy little neighborhood, full of charm and local color. Turns out it’s actually stuck between two national fast food chains in a tiny little strip center just off the interstate. 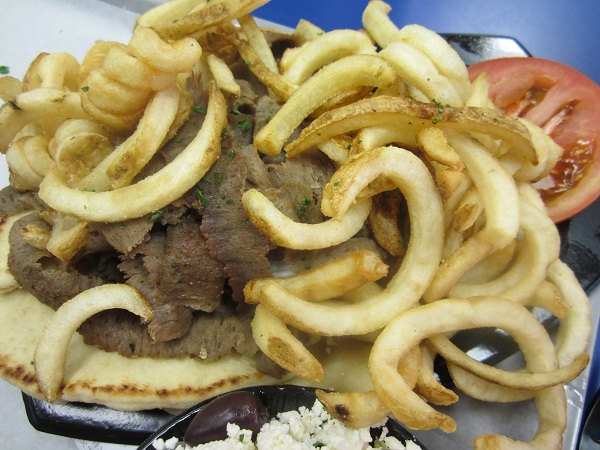 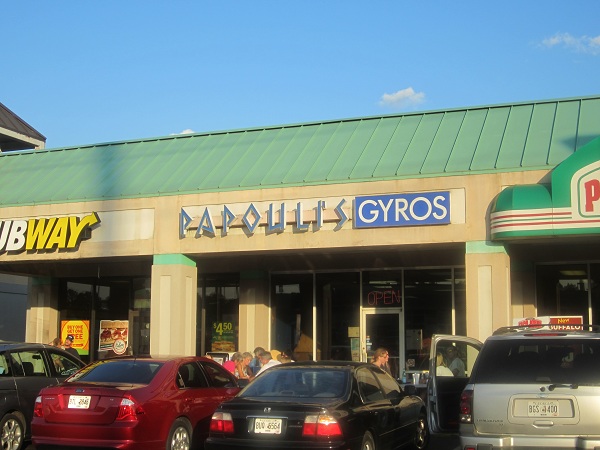 On our way back from Saint Simons, we stopped in Macon to meet up with two of our readers, Rex and Rachel. Rex has asked us a time or two before to give him a holler when we’re coming through town, but we’ve never been able to sync schedules before. We almost didn’t this time, either. My cell phone company had indigestion or something and wasn’t letting me send or receive texts for a few days. Just because I don’t like texting doesn’t mean I want to be inconvenienced by losing the function, you know. At any rate, it was very nice to finally meet him!

Parking is at a premium in this place. The lot is monopolized by a big Starbucks that draws a crowd at all hours. Also, the Katras family had several of their friends over for a big meal on this particular Sunday evening that took up the outdoor tables. I’m not sure why anybody wanted to eat outdoors, however. Road construction nearby on I-75 and Arkwright left the smell of tar and asphalt hanging heavily in the air.

Inside, the baby squirmed against the knot we tied in the highchair’s broken straps – this was the second middle Georgia disappointment in one weekend – but was otherwise well-behaved as we dug in. I had the same gyro plate that I normally ordered at their Alpharetta restaurant. Rather than a sandwich, it is a large order of meat served open face atop triangles of pita bread and vegetables with a cup of tzatziki and buried under curly fries. The meat is so flavorful and tender, easily every bit as good as the best that Atlanta’s Mediterranean restaurants can offer. The Alpharetta store’s isolation keeps it off many people’s radar, sadly.

It leaves me wondering whether the popular Greek Corner Deli is worth a stop. Rex says that it is, but, like most of the best restaurants in the region, it is closed on Sundays. I’m very glad that Papouli’s is open, though. It’s always nice to find someplace interstate-friendly where we can stop on a Sunday and enjoy a good meal with good people.

Other blog posts about Papouli’s: