So, another expedition over to Chamblee to get something to eat from the city’s most eclectic and one of the most fun stretches of road. This time, the objective was to sample a little Vietnamese cuisine from a couple of places. We got some good recommendations from some of our fellow bloggers for what to try here. Leslie from The Food and Me suggested that we try a bowl of beef noodle soup from Pho Bac, and Jason from Kitchen Man Can suggested that we get a traditional bánh mì sandwich from Lee’s Bakery. Both restaurants have been written about fairly extensively. So we loaded up the children two Saturdays back and took off for Buford Highway.

One of the first irrelevant things that I learned on this trip is that the Vietnamese language, when written in English, is almost comically packed with diacritics over the vowels. This makes a little sense when you consider the many decades of influence that the French had over this region, but they rather took it to extreme if you ask me. Hopefully, your browser will display this article correctly!

Anyway, we started at Pho Bac, which is located right next door to Coco’s. When I visited Coco’s last month, they had not yet opened and nobody was visible inside. I almost gave up and went to Pho Bac, which opens at the sensibly early hour of ten, before the lights came on. It is a big place and was fairly packed with guests. We sat down to three small bowls of beef noodle soup, and neglected to photograph them. You’ll have to settle for this shot of the exterior instead. 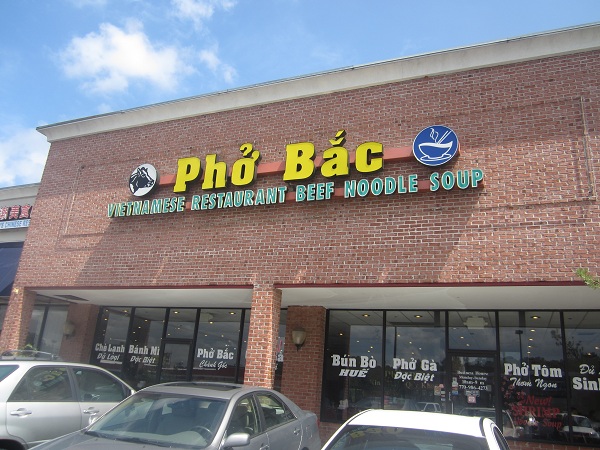 Marie ordered the “special combination” pho dac biêt. This is their most popular dish. Interestingly, each is listed on the menu with a rundown of the different meats in the bowl with rice noodles. So a pho dac biêt is Tái, nạm, gầu, gân, sách. That’s rare steak, flank steak, fat brisket, tendon and tripe. I ordered the #4, which is very similar. It’s Tái, chín, nạm, gân, sách, and just replaces the fat brisket with well-done brisket. My daughter had the sense to order something a little more removed from what we had. The Bò Viên is beef meatballs. She did not actually enjoy them, and so retired from her bowl after about half of it. Marie and I tried the meatballs and darned if she didn’t order the best thing. Perhaps the meatballs are a concession to western palates, as strips of steak are more common, but they are much more flavorful than anything that Marie and I sampled.

To be honest, I thought this was curious and interesting, but it did not really take my breath away. Soups almost never do; I was not expecting this to. What made this more unique and fun was the little side plate, which included basil, bean sprouts, limes, cilantro and sliced jalapeno peppers. Looking around, we saw that some other diners just dumped some of the contents of the plate into their soup bowls, and others were eating them as a side dish. I didn’t get enough of a consensus to play “when in Rome,” so I put the peppers in my soup and ate the bean sprouts separately. I think that, should we try pho again, it will be in cooler weather.

Bánh mì, on the other hand, I fully intend to have lots more of, and soon. We had a great time at Lee’s Bakery, and I am totally loving this inexpensive sandwich. But before we went there, we had an exercise break and walked the aisles of the Buford Highway Flea Market. I can barely remember what this place was like when I last visited, twenty-plus years ago, but any lingering hopes that maybe, maybe, somebody found an old box of comics from the long, long-closed Nippon Daido grocery store that used to be on the hill behind it were quelled pretty quickly. We used to buy those little paperback collections of Japanese comics there, priced at a penny to the yen, and never bought enough of them because I never had enough money. When I think about all those Osamu Tezuka collections still not reprinted by American publishers that I did not purchase for about $3.90 each – Vampire, Cyborg Big X, others – it just makes me wish for a time machine. But no, today, the Flea Market is home to almost exclusively Spanish-speaking vendors, with some taco stands in the back that I might try one of these days.

Lee’s is further south, inside the Atlanta city limits and just before you get to Clairmont Road, in a little strip mall beside and behind a Chevron. You can get croissants and loaf bread here, along with fantastic little bánh mì sandwiches for $3 and under. 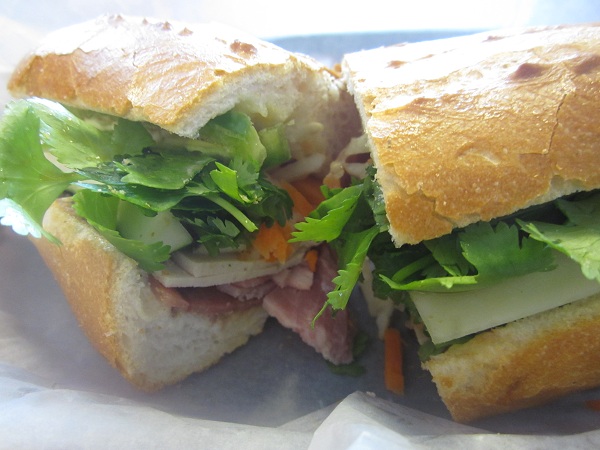 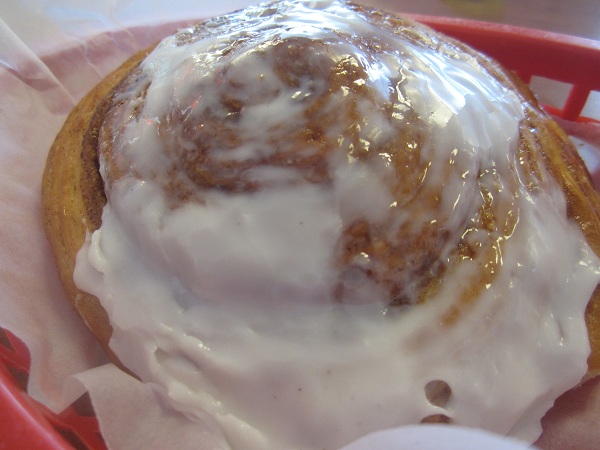 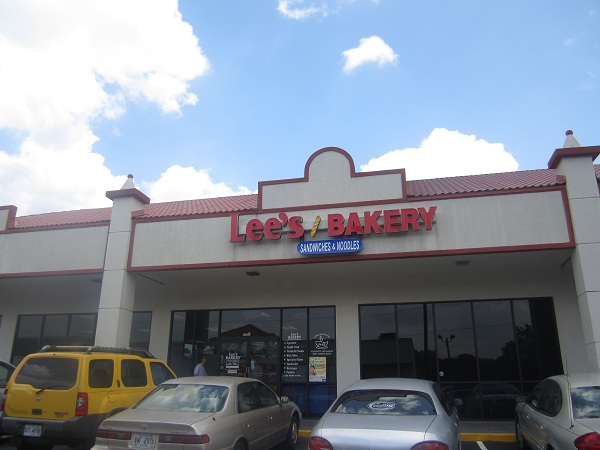 Technically, I’ve learned since trying this out, what I actually had was Lee’s special bánh mì pâté thịt, because “bánh mì” itself refers to the bread, a crusty baquette, but everybody just calls the sandwich, simply, a bánh mì. It is typically prepared with pâté and sliced cold cuts, almost always pork, and served with pickled vegetables, garlic mayonnaise, fresh jalepeno peppers, and cilantro. It is a really fantastic sandwich, and it costs only three dollars. If you’re taking it with you, they knock fifty cents off the price. I think it’s downright remarkable, and blogger Chloe Morris says that the ones at Quoc Huong are even better? I am going to definitely try that soon.

Marie and the girlchild were less interested in digging in. My daughter had a chocolate croissant that she enjoyed a lot, but the ladies mainly indulged in smoothies. The girlchild had a mango smoothie that was completely wonderful and full of flavor. Marie went with something downright amazingly curious: an avocado smoothie. Well, if you ever wanted to see what a guacamole milkshake might taste like, it tastes like this: incredibly weird.

We are planning to return to this side of town in a week and sample some Korean places. I might just skip breakfast and leave room for another one of these sandwiches, however. Whether we might swing back by Lee’s for a different sandwich on their menu or try Quoc Hong, I’m not sure, but I’m certain to love it.

Other blog posts about Lee’s:

3 thoughts on “Pho and Bánh mì”