The first time that I ever tried Vietnamese cooking, it was a year and a half ago, when I went up to Jimmy Carter Boulevard, that well-meaning but generally ineffective avenue in the Norcross area, to visit the much talked-about Nam Phuong. I left with that curious feeling of being pleased but dissatisfied. The food that I ate was good, but I didn’t have anybody to share the experience with, and I just sort of had to hope for the best. END_OF_DOCUMENT_TOKEN_TO_BE_REPLACED

As I fumble and bumble my way through learning a little bit more here and there about different cuisines and the regions what concocted ’em, the road took me back over to Buford Highway to sample a little more Vietnamese cooking. Marie and I had intended for some time to dig back into this part of town and try some more pho parlors, but our weekends became backlogged, especially with out-of-town guests and preparations for her big, long bizness trip to Ohio. So even though we’ve established that Marie enjoys Korean, Vietnamese, and Chinese foods more than I do, I decided to make a solo outing to Buford Highway and see what I could find, and maybe see whether my preconceived notions could be foiled. END_OF_DOCUMENT_TOKEN_TO_BE_REPLACED

Since our visit to Buford Highway last month to sample pho and bánh mì sandwiches, I’ve been looking forward to returning to Lee’s Bakery for another, but I’ve also wanted to have one from another restaurant. Chow Down Atlanta’s guide (link dead) suggested that there could be as many as four more places that assemble a better bánh mì than Lee’s. So I decided to visit the restaurant that is number one on her list, a small place in the Asian Square strip mall called Quốc Húóng. It is closed on Thursdays, which is the usual day that I go out and play for lunch by myself, but two weeks ago, Marie and the kids went down to Saint Simons Island while I stayed in town to work some extra hours. This gave me the chance to go visit on a Friday. END_OF_DOCUMENT_TOKEN_TO_BE_REPLACED

So, another expedition over to Chamblee to get something to eat from the city’s most eclectic and one of the most fun stretches of road. This time, the objective was to sample a little Vietnamese cuisine from a couple of places. We got some good recommendations from some of our fellow bloggers for what to try here. Leslie from The Food and Me suggested that we try a bowl of beef noodle soup from Pho Bac, and Jason from Kitchen Man Can suggested that we get a traditional bánh mì sandwich from Lee’s Bakery. Both restaurants have been written about fairly extensively. So we loaded up the children two Saturdays back and took off for Buford Highway. END_OF_DOCUMENT_TOKEN_TO_BE_REPLACED

Nam Phuong is a good restaurant, and possibly an excellent one, but I’m certain that I did myself a disservice by lunching alone here. It’s been on my to-do list for quite a few months, just waiting for me to be in the mood to sample it. I figured that I needed to give it a try after reading Jennifer Zyman’s fascinating review of it. Zyman, who writes under the nom de blog The Blissful Glutton, is among this region’s best food writers, and one with a number of followers and fans. She could wax eloquent about a McDonald’s in Fairburn, and I’m pretty sure somebody would be trying to explain to his wife what the hell he’s doing stumbling home from south Fulton with Big Mac on his breath.

Anyway, I had not found reason to look around Jimmy Carter Boulevard in Norcross for simply ages, and I amused myself driving up and down. Once upon a time, a terrific store called Eat More Records was located here; they once bought quite a few bootleg CDs that I found myself possessing. It is a deeply ugly, sprawling mess of a road. I’ll never forget riding around with my good friends Dave, who now lives in Toronto, and Kevin, who now lives in Washington, spending miles of gridlock on that damn road trying to get back to I-85 and realizing, across fifty-eleven stupid jokes, just how very much like its namesake this road really is. “Jimmy Carter Boulevard means well,” Kevin said, “but it’s mostly ineffective in accomplishing its goals.”

In the early nineties, a good chunk of this corridor evolved into a Spanish-speaking neighborhood. Today, Asian families have started opening businesses and several strip malls are entirely Asian-owned, like a smaller version of much of the commerce along Buford Highway. There are still several Hispanic-focused businesses – one of the region’s two Pollo Campero restaurants is along here – but you can see the decline in the number that have shuttered. Perhaps most amusing is a former nightclub located right in front of the strip mall where Nam Phuong is found. It was called El Imperio, and its crumbling “castle” facade, with the front entrance built to look like guests entered through a dragon’s mouth, looks like something to excite eleven year-olds at a mini-golf.

This doesn’t look like a neighborhood where elegant, upscale dining can be found. Appearances are deceiving. 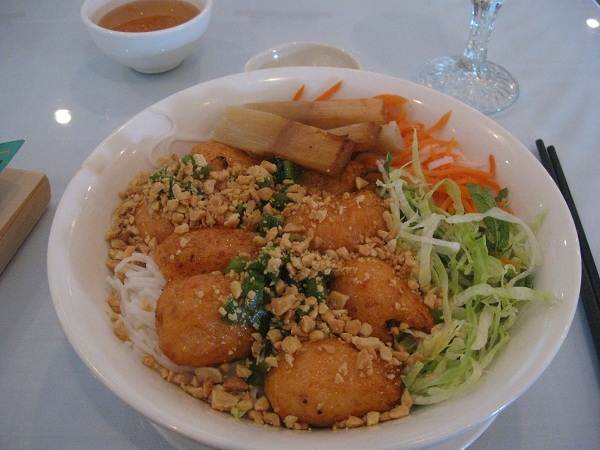 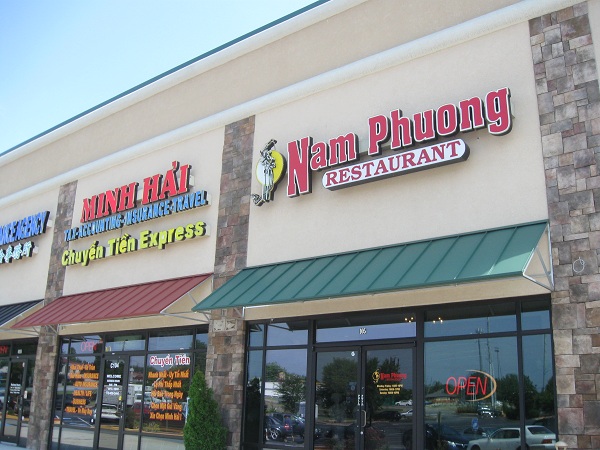 This is a really nice restaurant. Everything about it is classy and genuine. The servers were really nice and nothing felt artificial or phony. They did a great job making me feel welcome.

I had an order of bun chao tom, and that probably wasn’t what I wanted. It was ground shrimp with sugar cane served in a bowl over rice vermicelli with lettuce and carrots, sprinkled with crushed peanuts and with a small bowl of a fish sauce on the side. I never had sugar cane before, so I ordered this instead of the bun tau hu ki cuon tom, which is shrimp wrapped in bean curd. I’m certain that I would have enjoyed that more. Ordering sugar cane, I’ve since learned, is a polite way of eating scraps of wood in public.

I also had an appetizer order of bi cuon, which are shredded pork rolls. These do not come in those crispy, fried, golden brown shells that you see in all the sweet-n-sour Chinese places in the suburbs, but a slightly moist, white rice paper. These were quite tasty.

Everything was good, but I do think that I shot myself in the foot by trying this place by myself. Nam Phuong’s menu is huge, and jam packed with dishes that I’ve never heard of. My experience of Chinese, Korean or Vietnamese cooking is, sadly, still limited to the Golden-This-Happy-That school of red sweet-n-sour sauces. I’ve grown to loathe eating at those sorts of restaurants, and I just sing with the opportunity to try something so different and so interesting as this. While my meal was good, I would really like to return with a large group and sample many different things from everybody’s orders. Doesn’t that sound like a fun evening out?

Other blog posts about Nam Phuong: