This is Marie, contributing an article about a day of excessive indulgence we have called The Festival Of Dairy. As regular readers of the blog may have noticed, I have been avoiding dairy since we noticed that our son was sensitive to cow’s milk proteins. Well, he’s sensitive to a bunch of other stuff too, although we have never been totally sure what, but at least that one thing we could prove and replicate. As a result, I have been avoiding some of the foods I love most, such as good cheese, cheesecake, ice cream, most chocolates, and more.

On top of that was everything I was avoiding on suspicion, either permanently or in sequence, so I wound up weighing 8 pounds less than Before Baby. So on the one hand, I was pretty proud of making it so far, but on the other it was just getting to be time to make a transition. So after some hemming and hawing (and a bit of foot-dragging on my part), we determined that on the day the baby tuned 10 months would be when I would break free of dietary restraints and let the kid eat formula. Don’t worry, folks – we’d done some transition work with him so he wouldn’t be in complete shock at the change.

The first place we went to was Woody’s for a cheesesteak. As a fair warning, it is equipped with one of the worst parking lots in the city, so make sure to go when you won’t be tempted to drive somewhere else just because you can’t get a convenient parking spot – the food is definitely worth a bit of searching around for somewhere to stash your car. 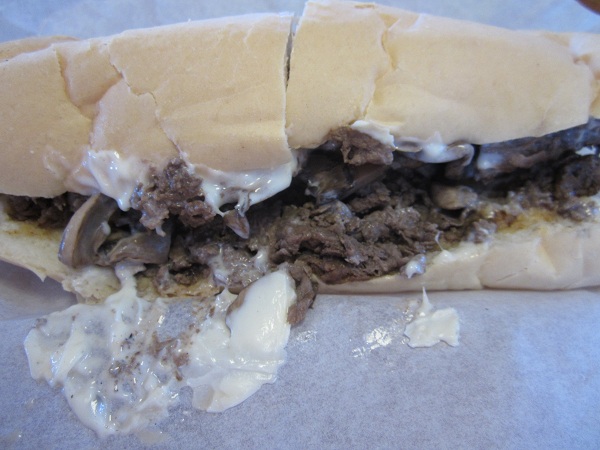 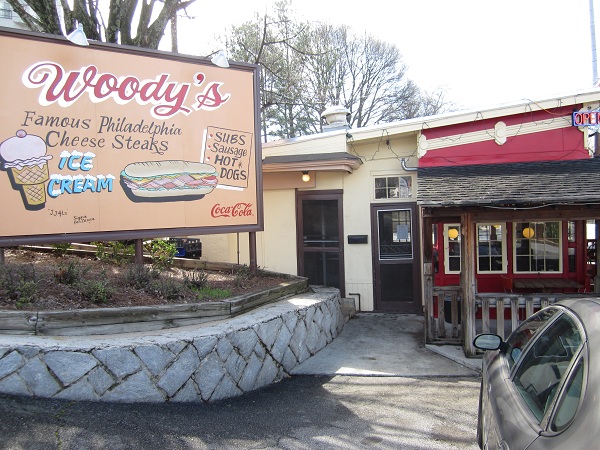 It might also be useful to have two people go for take-out, so that if you need to drive around a bit the passenger can go in to place the order. In our case, we were pleased to see that the last parking space left was right in front of the door. You walk into a tiny dining room with cute wooden booths and past the grill. It is separated from the order desk by just a window, so you can watch your Philly being cooked while you wait, if you are so moved. We of course ordered our sandwich with extra cheese, and I would recommend that, especially if any toppings like mushrooms are added. The chopped beef just soaks up cheese.

Don’t be fooled by the apparent overabundance in the photo; the sandwich was not gooey, it was just right. The meat was tasty and the mushrooms complemented it very well. Our daughter, who is not as fond of hot sandwiches and would make a project of getting as many desserts as possible over the course of the day, had a milkshake. She declared it better than Steak & Shake, which is a better compliment than it sounds. She loves those shakes. Our sandwich was gone way too fast – if we hadn’t had a day of decadence ahead of us I would have felt ready to take on the large sandwich by myself rather than just sharing it with Grant, but we had places to go and treats to enjoy!

The next stop was Zesto, which has been the subject of a previous entry. It’s been a favorite treat for several years, and I planned to have my usual comfort flavor of malt, chocolate banana, rather than exploring one of the many other options. It’s just a fun retro place to go. it was a little odd to travel though the pretty wooded Poncy neighborhoods and come out on the ugly blight that is Ponce de Leon Boulevard, turn into this place that looks like it has been there since the dawn of milkshakes and then get such a good quality experience. 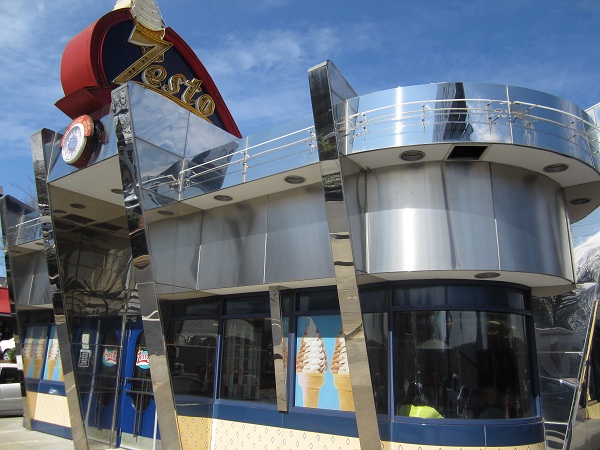 The staff behind the counter have without exception been friendly, upbeat, and pleased to see us no matter how busy it’s been, and I don’t recall that we’ve ever had a problem with our order. Also, probably by chance, we got some really good pictures of both kids. The first sip of milkshake in months was just so good. In the past I had been done with milkshakes before the cup was more than half to 2/3 finished, and generally passed the remainder to the back seat for a child to finish. Not this time. I slurped the bottom of that cup with the straw in regret that it was done already. We actually had another slightly odd parking experience this time, which would be a bit of a theme for the day. Has anyone ever made a left turn onto Ponce from Zesto without having to pause? Well, we did. Mind you, we paid our Karma tax beforehand by having had to wait a good five minutes waiting for a gap big enough to get into the place to begin with.

After Zesto we stopped in at Savage Pizza in Little Five Points to have lunch with our friends James, Victoria, and their baby, who is two weeks older than ours. They were kind enough to join part of the Festival, and their baby was so much fun to watch. At one point, he chugged down his lunch in under four minutes, then gave us such a beautiful look of dismay and disbelief at seeing us feed our little guy without sharing! 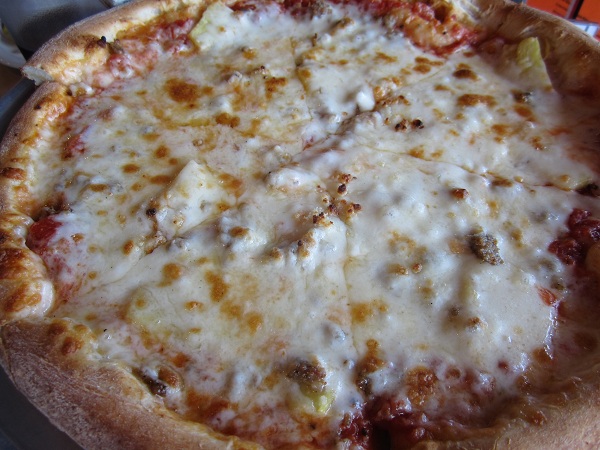 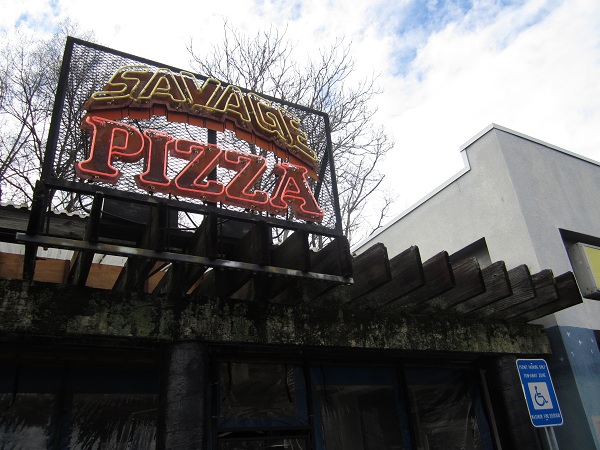 Savage Pizza is a place with a sense of humor. There are toys hanging from the ceiling, giant recreations of Jim Steranko illustrations, and comic book covers papering the interior walls. Regrettably, there is such limited free parking that the staff must be vigilant beyond reason to make sure that guests are not taking advantage of their spots, so a sense of humor is a truly valuable thing. At this point in our trek hunger wasn’t really an issue any more, it was more the enjoyment of the experience. We shared a small pizza with extra cheese, sausage and pineapple, and some ridiculously tasty buttery garlic knots. The girlchild had apparently made a personal commitment to eat only desserts (aside from a few chips and fries, which hardly count) and was eager to get to our last stop.

We ended our trek at the tremendously cute Frosty Caboose, which we first read about last summer when The Food and Me gave it a short mention. It is a stranded train car on some disused track in the gentrifying industrial area of Chamblee, sadly without much in the way of seating except some planters that can serve as benches. 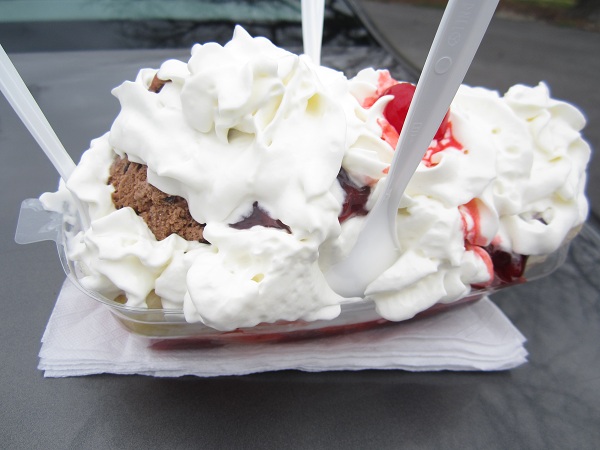 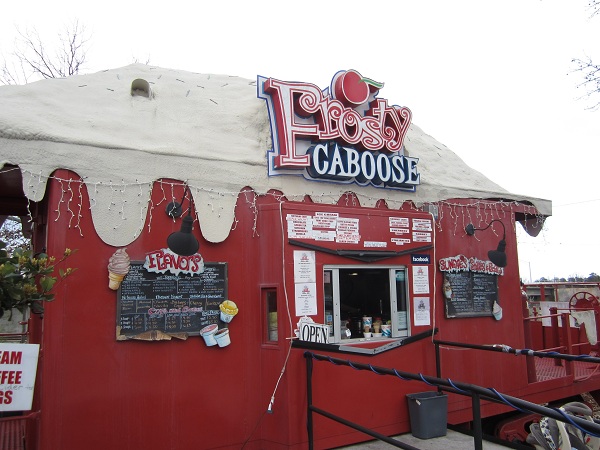 If you want a leisurely session with a great bowl of ice cream, bring a camp chair. But do go ahead and eat at the location, because if you don’t you’ll miss out. We saw a dad come with two really little kids, one barely older than a toddler, who brought his own bowl. The kid was clutching the yellow plastic like a blankie. Another pack of a half dozen or so kids came swarming up onto the back of the caboose and rang the bell and shouted ridiculous things like “warning bell!” in feverish joy. We also saw a couple of new parents come to enjoy the weather with a scoop or two. It’s a friendly place, and the only improvement I could see would be the addition of a covered area with a picnic bench or two. The ice cream itself is excellent – we shared a banana split with strawberry and two kinds of chocolate – and I can see coming there again even though it’s a bit out of the way.

Technically, although the Frosty Caboose was the end of the family tour of restaurants, the consumption of Stuff Formerly Off-Limits did not end. I went over to the Whole Foods cheese counter and lingered, dawdled, and looked at samples, and wound up with a mild Gouda (Roomkaas, a really buttery rich kind), a medium-sharp cheddar, and a crumbly sharp cheddar from Ireland called Kilaree. Sadly, I was to eager to dig into the cheese that I did not take good note of the milder cheddar, which is a shame.

Grilled cheese sandwiches were the very first thing that my mother trusted me to make for myself that involved a hot cooking surface, and they turned into my go-to comfort food for quite a while. As I get older, however, I wind up making them less and less often, and when I do make them it’s likelier than not that they will be made with cheese costing $15 a pound or upwards. The best one I ever made is a cheese that I can only get from mail order, and that was almost included in the Festival, but since shipping for cheese is as much as another whole block, I opted for the option that included more cheese. However, if you ever want a truly magnificent Dutch cheese, order from Zingermans. That’s the real stuff.

We ended the day at Sweet Tomatoes, for the March special which is creamy tomato soup. It was a great end to the day, since a great big salad was definitely what my system needed after all that dairy, and a couple of bowls of soup to warm me up at the end was just the thing. We mainly go to Sweet Tomatoes in March because that is really their best soup. If they had it more often we’d go more, but then I would have been missing it along with everything else!

One thought on “The Festival of Dairy”