For the three years that we have been blogging, we have tried to take alternate paths on our regular trips from Atlanta to Saint Simons Island. For one thing, I-16 is a total bore, and for another, we’ve wanted to cover roads rarely taken, and find restaurants, meals, and stories in smaller, out-of-the-way towns. We have always anticipated moving to Asheville – and perhaps will, later this year – and, when that day comes, the big, dull expanse of central Georgia will be amazingly out of the way. It’s best to tackle it now, which is why Savannah is so poorly represented here. There will be time enough for Savannah down the line. END_OF_DOCUMENT_TOKEN_TO_BE_REPLACED

A couple of weeks ago, Marie and I loaded up the children and braved the Spring Break traffic for a weekend visiting her parents on Saint Simons Island. It wasn’t to be a very big trip, and we had to rush to fight our way through gridlock and lengthy baby-changing business – and boy, did this kid ever let us know that we needed to get to Cochran and change him – in the hopes of getting to the island at a reasonable hour. In the end, the trip, normally five-hours-and-a-bit if you do it direct, took nearer to seven thanks to all the backup between Atlanta and Hampton. END_OF_DOCUMENT_TOKEN_TO_BE_REPLACED

Sometimes, dear readers, tenuous little coincidences that nobody else either notices or cares about take on a supernatural charm with me. These meaningless little patterns of life tantalize and amuse me more than they do anybody else, and sometimes they inform the resulting writing in this blog. Be aware that I know very well that these chances don’t mean anything at all, that they don’t reflect a larger pattern, and don’t imply anything beyond simple smiles and a chuckle. But what good is life, without sharing smiles and chuckles? END_OF_DOCUMENT_TOKEN_TO_BE_REPLACED

I had two very good reasons, I thought, for picking Henderson’s as a place to visit in Thomasville, but neither of them were enough to sway our friend Victoria about the plan. She grew up in Thomasville and assured us that there were many better restaurants*. She said that we were certain to enjoy a much-loved pool room that serves awesome chili dogs, and I must agree that does sound like fun. END_OF_DOCUMENT_TOKEN_TO_BE_REPLACED

In retrospect, it’s almost funny that I told Chris that we might see a little bit more of north Florida on this last trip down to visit him. We left after sunset. We didn’t see anything. Well, as Marie and the children slept, I did see a really funny series of signs along I-10. Heading west, there’s a sign that reads “Lake City: Next 3 Exits.” Then there’s an exit for US-90, and then you enter the Osceola National Forest and spend about twenty miles driving through the darkness. Then you exit the forest and a sign reads “Lake City: Next 2 Exits.” END_OF_DOCUMENT_TOKEN_TO_BE_REPLACED

It was August of last year that I fired off an email to Marie regarding Providence Canyon State Park. “How the heck have we never heard of this place?” I asked. It looked amazing; a gigantic accident of bad farming techniques in the 19th Century that left several 150-foot chasms eroded into the earth. I resolved that we would visit as soon as it got cooler. Of course, as soon as it got cooler, we learned that we were having a baby, and perhaps strenuous four-mile hikes like that would best be left for another year.

So, fourteen months after I discovered the place, we finally made our way on a breezy day in late October. That meant that I had fourteen months to wonder what the food would be like at 4 Way BBQ, because there did not appear to be anything else to eat in the small town of Lumpkin. Locals wanting to dine out pretty much have to drive to Richland, about ten miles east. The town is the site of one of those odd little roadway trivialities that I find cute. Many years after Lumpkin was established, highway planners dropped US-27 and GA-27 just on the town’s outskirts, making one of the few places I’ve ever seen where a US highway and a state highway of the same number intersect. I bet you’re going to rush out and tell all your friends this fascinating fact, right?

US-27 really is a road full of nothing. Once you leave Fort Benning and start making your way towards south Georgia, there is virtually no development at all. There are no towns or communities or even gas stations at all, and, consequently, very few choices for finding anything to eat.

Located at Lumpkin’s only four-way stop, 4 Way is an old home that has been partially converted into a restaurant, with tables on the front porch and some interior seating partitioned away from the living space. It has only been open for seven years, but the signage on US-27 looks much older and weather-beaten, bleached out by the merciless middle Georgia sun. 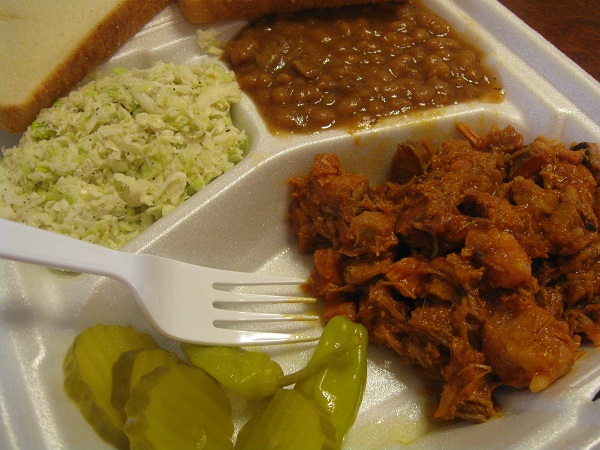 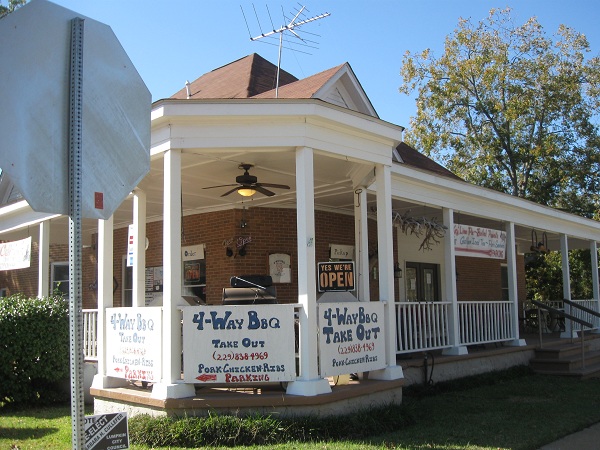 I was very disappointed that you can’t get the hickory-smoked pork dry here. We have not often found meat simmered in sauce since we started this blog. Troy’s, 173 miles north up US-27 in Rome, does it this way, as does a place that Matt and I visited in nearby Parrott many years before. It’s tasty, I suppose, but still a little unsatisfying. I would greatly prefer to sample the meat on its own, without the sweet, light brown sauce. The result is something more like cafeteria-served barbecue, and with smokers right on the front porch drawing in guests with such a delicious scent, I can’t imagine why it’s necessary, beyond family tradition, to serve it this way. For what it’s worth, Marie ordered the chicken sandwich. This was a hickory-smoked boneless filet, and was served dry, and was quite good. I think that, should the road bring us back this way again, I would prefer to try the ribs.

Happily, the sides here are completely terrific, and while the pork is only notable from the perspective of doing it a little differently than most, all of the accompaniments are quite flavorful. A plate here comes with beans, baked in a thick, oniony sauce, excellent cole slaw, and a few peppers and knockout dill pickles. They boast that everything here except for the hot dogs and sausages are homemade and fresh. I found myself regretting that Brunswick stew is not on the menu, as I can imagine it being quite good here; as we left, we saw it listed as a special outside. We missed out!

Having said all that, we might have had the best unknown-to-me barbecue in the state and it still might have paled in comparison with Providence Canyon. It really met my expectations, and we had a fantastic time. We only went into two of the nine canyons, as I missed any online notices that the canyon floors are incredibly muddy and wet, and we were only dressed for the mildest of exploration. What we saw was completely amazing, and it was a fine day’s exercise.

I feel strongly, of course, about getting a little exercise on these sorts of trips, and with the meals ahead of us on this outing, we would certainly need some exercise. If you live within two hundred miles of this place, I would really recommend you come visit. It ranks with Tallulah Gorge as one of my favorite outdoor sites in Georgia, and while the barbecue probably was not really worth a fourteen-month wait, the canyon definitely was.