Since I mentioned a few chapters back that I intend to do a better job looking for reliable Indian restaurants in the Atlanta area, I received some recommendations from readers that sound terrific. I intend to visit those in the next month or two, but first, opportunity presented itself and I had lunch at Swapna on Cobb Parkway just outside the perimeter. I really wanted to try this place because, unlike several other places around Atlanta, it gets rave reviews for its buffet lunch. I really did enjoy the buffet at the since-closed Moksha in Roswell a lot more than I thought plausible, and I was keen to try different things at different restaurants. END_OF_DOCUMENT_TOKEN_TO_BE_REPLACED

The last time that I went out to try some local Indian food, I found myself choking back the tears at the nearly too-hot-for-words Planet Bombay. So, a couple of weeks later, when the sidewalk took me to NaanStop at its first brick-and-mortar store in Atlanta, I decided to sample a wider range of flavors other than “painful.” The restaurant has joined many others on the shaded lane of Broad Street, next door to Rosa’s Pizza, serving up quick “street food”-inspired Indian meals for GSU students and bankers in the area. I had read a little buzz about NaanStop opening, and walked the six-tenths of a mile from my job to get there as they opened a couple of Fridays back. END_OF_DOCUMENT_TOKEN_TO_BE_REPLACED

A few weeks ago, after a trip to Bhojanic sparked hopes that I might find some reliably good Indian food in the Atlanta area after all, I made a shortlist of four to try. First up was Planet Bombay. It’s located in Little Five Points, across the street from the Junkman’s Daughter, in a space that has been home to more than one Indian restaurant. I believe that the business that preceded Planet Bombay here was called Curry House, and it closed in 1998. Planet Bombay opened here soon after, but I have spent many years being mistaken on one point. I honestly thought that this restaurant used to be located around the corner on Euclid and moved here, but that seems not to be true. Does anybody remember what that Indian restaurant that was on Euclid, a couple of doors down from where Criminal is now, was called? END_OF_DOCUMENT_TOKEN_TO_BE_REPLACED

We have not featured very many Indian restaurants on this blog overall, and certainly not recently. There are two reasons for this. Indian is about the only cultural cuisine that Marie sternly and firmly resists, finding no pleasure in it, and, last year, I just plain got spoiled by a wonderful place in Asheville called Chai Pani. I enjoyed it tremendously and, discouraged by many years of pre-blogging searching for really good Indian food, I guess that I just drew the line there. I simply have not been in the mood to search for anything new in Atlanta for many, many months. END_OF_DOCUMENT_TOKEN_TO_BE_REPLACED

I’ve only had a single meal here, and it was something that I’ve never tried before, but I have finally found an Indian restaurant to replace the dearly missed Moksha in my affections. Shame the darn place is all the way up in Asheville. It’s called Chai Pani and it is thunderously unlike any of the legion of boring, rule-following, horribly-serviced, tableclothed Indian restaurants that drive me nuts here in Atlanta. This place is completely wonderful, and I really am looking forward to digging into their menu and trying a few more dishes! END_OF_DOCUMENT_TOKEN_TO_BE_REPLACED

It has been several months since I went out for any Indian food. Longtime readers might recall that my favorite Indian restaurant in the region, Roswell’s Moksha, had closed, and I made a couple of fitful attempts to find a replacement. I found some pretty good food, but nothing remarkable, and I got a little discouraged and bored and resumed finding more barbecue and burger places.

In April, writing for The Atlanta Journal-Constitution‘s “Food and More” blog, Gene Lee recommended three Indian restaurants in Decatur. This was part of the blog’s “Spring Dining 2011” guide and got me thinking. Maybe Marie and I could do a tour of all three one Saturday…?

Well, I was sort of stymied here, as Marie really doesn’t care all that much for Indian food. You’ll notice she has been absent from this blog’s few trips to Indian restaurants. She does like a little curry powder with her chicken salad, but otherwise most of that region’s cuisine does not appeal to her. Nevertheless, she agreed that we could give it a try if I would compromise and drop it to two restaurants. We took the baby and my older son and our good buddy David along and figured out the best way to plan these two lunches.

First up, we went to a vegetarian restaurant, where we planned that Marie would have a full meal, I would have an appetizer, and our older son would drum his fingers impatiently and wait for his larger meal at the next destination. I was sweet; I let him have an order of plantain bhaji that was quite delicious and had a nice level of spice to it. 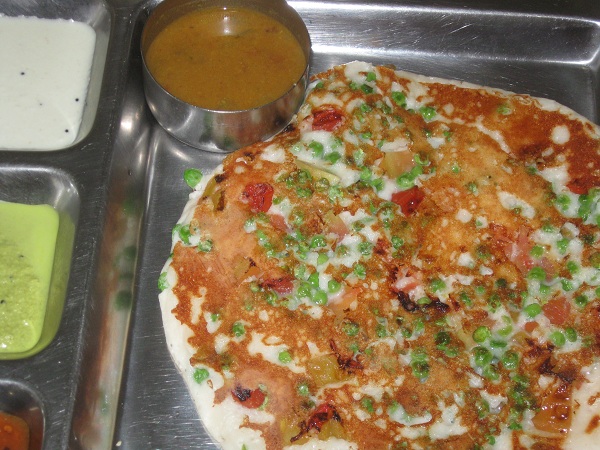 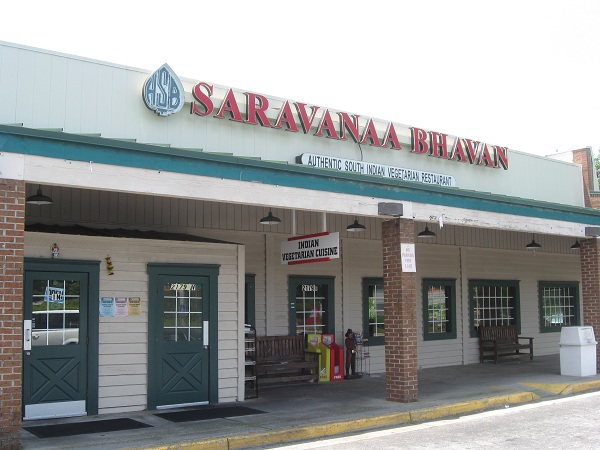 Saravanaa Bhavan is the second restaurant by that name to occupy this space. The earlier version closed in 2008 and was bought by an international chain of hotels and vegetarian restaurants. This particular location doesn’t actually have any guest rooms, but the chain itself is kind of like a Howard Johnson’s that specializes in dosa. This is a huge, thin filled crepe and I think of it as a counterpoint to an uthappam, which is thicker, like a pancake. There’s a big window into the kitchen where you can watch the staff make the dosas and other treats.

Taking Lee’s recommendation, Marie ordered the masala dosa, which is the crepe filled with a curried mashed potato. It’s enormous, and served with four different dipping sauces. She also had an order of buttered naan and this was more food than she felt like tackling. In her defense, unfortunately, the atmosphere here did her in. While the food was all indeed very good, the restaurant ruined the air inside with the most noxious, repugnant incense by the entrance. Frankly, we couldn’t wait to leave. My tomato and pea uthappam was genuinely good and I enjoyed the flavor of everything here, but I sure do wish that I could have enjoyed it in better circumstances.

On that note, “couldn’t wait to leave” has proven, in my experience, to be a common problem at Indian restaurants from here to Toronto. There has not been a one, except the ones where you pay up front, where flagging a server down to get a blasted check has not been a chore. Neither of the places that we visited on this trip were in a hurry to see us go. We wanted to leave Saravanaa Bhavan because the air stank. We wanted to leave Mirch Masala because we were stuffed. 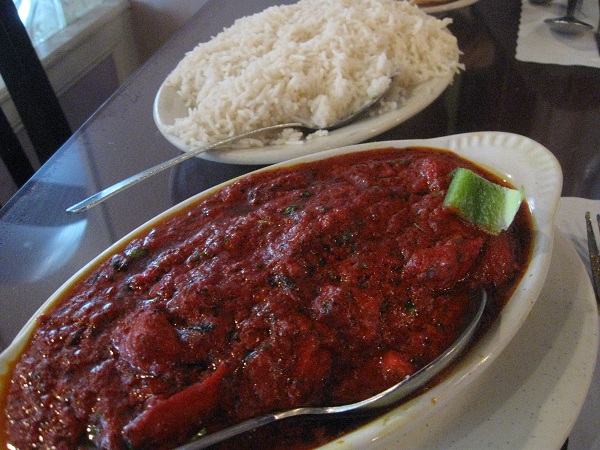 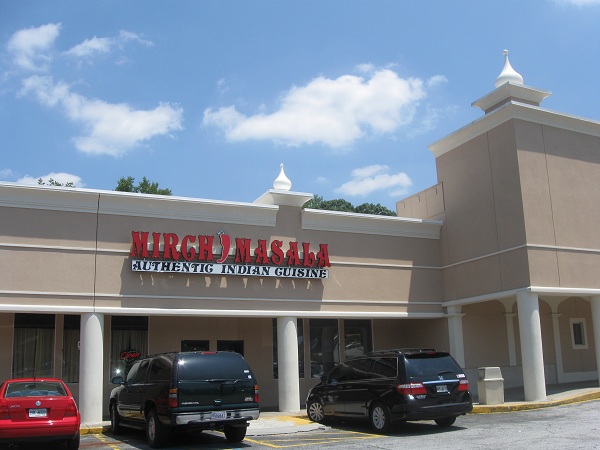 My heart sank as we entered Mirch Masala, which is located about three minutes’ south of Saravanaa Bhavan. It’s one of those Indian restaurants that suggests upscale by way of nice napkins and tuxedo-clad servers, but it’s hopelessly artificial. The menus are in leather cases, but the laminate on the heavy paper pages is peeling, comically, as they fall apart. There’s a 15% service fee on tables of four. Not six; four. Frankly, I hated the place so much that the best Indian food I ever had wouldn’t bring me back. Then I had some of the best Indian food I ever had and I was conflicted.

Gene Lee had recommended the chicken tikka masala here and I wanted to try it. Unfortunately, it was not on the buffet – $9.95 for weekend lunch – but priced at $11.95 for an order. I bit the bullet and was completely thrilled with it. The chicken was tender and flavored and seasoned just perfectly, and served in a deep red sauce that reminded me of molten lava. “It looks,” observed my son and channeling Ralph Wiggum, “like… hot.” He wasn’t kidding. I’ve had more lethally spicy food than this, but not often. It was majestic.

Marie ordered some rice called kashimiri pullao (basmati rice cooked with dried fruit) that she enjoyed, and they gave her enough to last for a subsequent lunch. My son and David each enjoyed some of the food on the buffet, which included both curried goat and chicken, and a spinach paneer that David said was excellent and as good as he’d ever had it. Food-wise, this place really was a winner. It’s a shame they had to spoil it by giving us such pathetic service and presentation.

Adding insult to injury, it took us about fifteen minutes after finishing our food to get a check. I don’t think this is all that complicated, really.

I’ll try again in a few months. There has to be a place in town that will give me excellent Indian food outside of a plastic quasi-upscale environment with attentive service at a fair price. Somewhere.

(Note: Saravanaa Bhavan briefly closed at the end of 2012 before reopening as Madras Bhavan, no longer affiliated with the hotel Saravanaa chain. I understand that it is still a vegetarian restaurant.)

I’ll tell you, friends, this was not the meal that I was hoping to find. It was very, very good, and calls out for investigation from more people who love unusual flavors and unique foods. Well, I knew going in that a vegetarian Indian restaurant was unlikely to replace the dearly-missed Moksha in my affections, and this didn’t, but it was a very different and very positive experience all the same. This is definitely a restaurant that Atlanta’s foodie community should quit overlooking and come visit.

For one thing, Vatica’s owner is by leagues the most engaging, friendly and welcoming host of any Indian place that I’ve ever visited. Having done just a cursory bit of research into what I could expect here, I explained to him that I knew virtually nothing of vegetarian Indian dishes, but that I understood this place specialized in something called thali, which is basically a buffet brought to your table. He told me that he’d make me a very good thali and tell me all about it.

About five minutes later, I had a huge circular tray in front of me, with small bowls of a variety of foods. He told me what each was. My meal included rice, a spicy stew called dal, potato curry, lentil curry, sweet potatoed curry, an onion yogurt called raita, a pita-like bread called roti, the delicious, thin spicy wafers called papadam, a potato and onion samosa and a little fruit cup. I apologized for inconveniencing him, but I’m actually allergic to sweet potatoes. So those went, and he brought me a small bowl of curried squash instead.

This place definitely has it down right. That sounds like a heck of a lot of food, but everything was in very sensible, small portions. If you’re looking for a broad sampling of flavors, you can do pretty well here, getting ten different things for nine bucks and change. I was most taken with the dal and with the potato curry, but everything was very tasty. I was further surprised when, about halfway through my meal, another fellow came by with a tray to refill whatever I wanted more of, so I had second helpings of the dal, the potato curry, the lentils and another couple of papadam wafers.

Honestly, this was a good – no, a very good – lunch, but I also realized as I ate that really, what I’ve come to expect, unfairly, from Indian cuisine is really tasty meat in a really spicy, scorch-yer-tongue sauce. This was one heck of a good meal, but not at all what I was looking for. I wonder where my ongoing search to replace Moksha will take me next?