I’ve been telling myself for a really long time to get over to this former Shrimp Boats at 2139 Lawrenceville Highway in Decatur and take some pictures of it. The one that accompanied our first story (linked above) was contributed by a reader. Last month, I stopped by to see it in person. END_OF_DOCUMENT_TOKEN_TO_BE_REPLACED

Over Labor Day weekend, we sampled a couple of new-to-us restaurants, but we did so under the chaos of festivals and conventions, when nobody is at their best. With that in mind, I thought I’d break up the routine by running down all the dining out that we did over the weekend, both new places and old favorites. END_OF_DOCUMENT_TOKEN_TO_BE_REPLACED

On July 4th, I wanted barbecue, and so did everybody else in this and probably every town. In the mid-afternoon, Fox Brothers tweeted that their wait for carry-out orders was two hours long. I decided to visit one of Atlanta’s less heralded and hyped barbecue joints, where the wait might not be endless. Joe and Christine Parks opened Papa Joe’s in 2012 with their son, Joe Jr., after five years of success on the tournament circuit, but they certainly had themselves a good crowd as well. END_OF_DOCUMENT_TOKEN_TO_BE_REPLACED

A couple of weeks ago, I wrote about a date night that initially served as our anniversary, because we were not certain we’d get any time to ourselves on the actual date that we tied the knot. Well, fortune moved its huge hand and we did indeed get just about a whole day to play. We started just after the lunch rush at Burnt Fork BBQ in Decatur. It had been on my to-do list longer than any other barbecue place in the Atlanta area, so we drove over here. END_OF_DOCUMENT_TOKEN_TO_BE_REPLACED

For this month’s attempt to expand my novice beer knowledge, a trip to Ale Yeah! in Roswell had my brother putting two bottles from Wild Heaven in my hands. He told me that these were local guys with a very small selection of beers. That sounded good, because it’s easier to get a handle on a brewery’s output when I don’t have sixty-eleven beers to track down, as will be the case with next month’s chapter about beer. END_OF_DOCUMENT_TOKEN_TO_BE_REPLACED

I’ll cut straight to the point: Jiyeon Lee and Cody Taylor have opened another restaurant called Sobban, and, like their first, the mighty Heirloom Market Bar-B-Que, they are serving very good food that has a huge crowd of curious and impatient diners in far too small a space. I was mostly very pleased with our experience, but then again, I seem to tolerate the October cold better than some do. END_OF_DOCUMENT_TOKEN_TO_BE_REPLACED 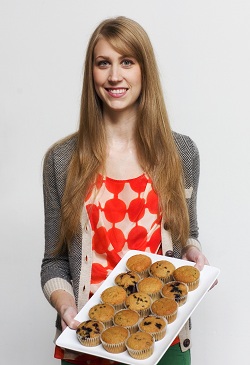 Normally, when I write a post, I start it out by saying “This is Marie,” so you’ll know that it is me and not Grant, but that seems strange when we have a picture on the side of somebody else. I’m contributing a tiny little post about a tiny little muffin. Look at them right here, being held up by their baker, Frannie. Aren’t they cute? Actually, I’m going to take a moment to talk about food allergies; if all you want to know is what I thought about the muffins, that’s in the last three paragraphs.

For a considerable portion of our baby’s infancy, he had eczema. Not the worst case ever (that would be his sister) but plenty of his baby pictures show him with big red scratched-up streaks all over, especially on his face. Poor little man. Anyway, I was convinced he had allergies to all sorts of things, because he’d flare up when I ate certain things, dairy and tomatoes especially. So I struggled with that for a while and finally put him on formula. The change didn’t help much because he was actually NOT ALLERGIC to any of my favorite suspects, although I remain convinced that the worst flare-ups were way too consistently and closely associated with certain foods to be totally coincidental. Anyway, this is a long way to get around to explaining why I read a lot of articles at Scary Mommy like this one and this one and getting even less sleep than I might have otherwise either worrying about things I couldn’t control, or obsessively trying to find recipes which excluded whatever allergen I suspected that week. END_OF_DOCUMENT_TOKEN_TO_BE_REPLACED